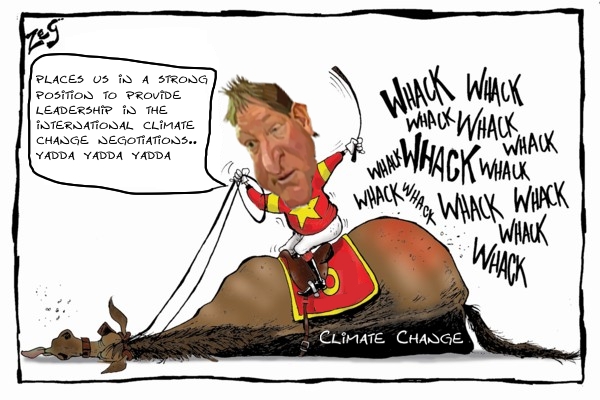 Helen Klark was a devotee of the United Nations. She governed NZ in accordance with the global governance view the UN advocates. When she left NZ, there was of course a big fat job waiting for her at the UN, with a big fat salary and a big fat office. This was after she had authorised the spending of millions of dollars of NZ taxpayer’s money on UN initiatives. Klark is gone now, thank God. Taking over as Chief of the UN cheer squad is the obsequious little “blue green” Nat Nick Smith. No doubt with his eye too on a UN job with all the fat stuff when the NZ electorate finally awakens to what a little sellout turd he is, and boots him out of office. Read what this arrogant little propagandist said in response to Adrian Macey, NZ Climate Change Ambassador (vomit) being appointed as Chair of the Kyoto Protocol.

“This appointment reaffirms the respect in which New Zealand is held in the international climate change negotiations as well as being a personal tribute to Adrian Macey and his work as New Zealand’s Climate Change Ambassador between 2006 and 2010,”

Who cares about damn respect from a gang of thugs, cronyists, dictators and totalitarians. How much is it costing me to buy the “respect” of people I mostly despise?

“New Zealand’s position as a developed country that is honouring its Kyoto obligations, has implemented the first ETS outside Europe, has initiated the Global Research Alliance on Agricultural Greenhouse Gases, and which has one of the highest proportions of renewable energy, places us in a strong position to provide leadership in the international climate change negotiations.

Its all lies. The idea, and this has been admitted by so many of the drivers of the scheme, is wealth redistribution. There is no man made climate change crisis. Smith is flapping his mouth as loud and fast as he can to try and cover up for the fact that he has drawn NZ into a failed and costly scheme that is going to be an immense drain on NZ’s economic resources at a time when we can least afford it. The real crisis Smith you sycophantic little weasel is in NZ’s economic condition. We just cannot afford this idiocy.

National have failed as an alternative government to Labour. They have done nothing but take us further down the socialist road and now we are bogged down in this farcical global wealth redistribution scheme. We need a third party to strip National of their mandate to tie us into these kind of foolish cronyist UN scenarios. If such a third party should arise, it must refuse to be part of any government that has this damn fool Smith in its cabinet.

13 thoughts on “Nick Smith Has Got To Go”