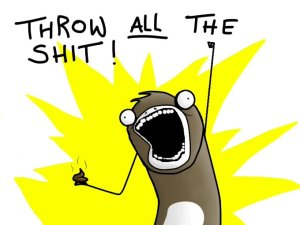 Colin Craig has a few things to learn about dealing with NZ’s extremely progressive left wing media, who are conducting a vicious smear campaign in an attempt to stop the Conservative Party gaining any seats in the coming election.

Since the rise of blogs, we have come to rely on certain websites to bring us views that challenge the invariably left wing reporting and opinion patterns we see in the NZ Herald and the Dominion Post and Radio NZ and TV One and TV3.

Not so in the case of Colin Craig. Whale Oil and Kiwiblog have joined forces with the mainstream media and are helping them enthusiastically in their intent to smear Craig and sabotage his chances of gaining a voice in parliament.

The Conservative Party is facing the kind of criticism one has never seen leveled at the race based Maori Party, (in coalition with National) or the Watermelons, or even NZ First.

Most criticisms I have read on Kiwiblog and Whale Oil have just been pitiful smears based on alleged wrong doing or mistakes of a very minor nature, but magnified far out of proportion by the enthusiasm of these two bloggers, who are desperate to discredit The Conservative Party and protect the progressive wing of National.

They want the left liberal John Key and his followers to remain in control there, and see the rise of the Conservative Party as a serious threat to the Progressive’s domination of National.

They see the possibility of a political dialog outside of the boundaries they consider “approved ” and it frightens them.

Colin Craig of course has already broadened the discussion base, and its clearly something these fake right wing bloggers dislike intensely. So they adopt the tactics of the left in an attempt to silence him.

It won’t work. For all his political immaturity Craig has struck a chord with many NZers who admire him for swimming against the Progressive tide. His words resonate with a section of the population who subscribe to the traditional political ideas the Progressives have struggled to destroy and suppress.

The Conservative Party is extremely embryonic in its present form, but it is here to stay.

Conservatives have the political momentum.

It is the Progressives and their bigoted and biased left wing media colleagues who are eventually going down.