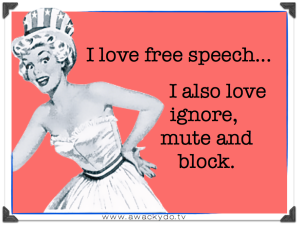 I had a small disagreement with an odious communist whiner on Twitter a while ago, during which my attention was caught by some of the phrases she used in describing the exchange to other communists.

She said that the conversation had made her feel “unsafe”. I wondered about this terminology, and I saw that this was yet another attempt by the left to stifle criticism and shut down any argument that directly confronts their ideas.

Especially if they’re for example a “feminist”, and the person disagreeing is male. Its the same old psycho-babble that suggests their arguments can’t stand the stress of logic or reason, so the opposition must be intimidated into silence by some false allegation that attempts to makes them feel ashamed of themselves.

So now as well as being wary of being labelled, homophobic, or Islamaphobic, or racist, or xenophobic, or bigoted, or sexist, or any of those kind of words, you also have to watch out you don’t make them feel unsafe. Here’s an example as reported by National Review-

Students at both Oberlin College in Ohio and Georgetown University in Washington, D.C., have been crying out that they fear for their safety because conservative groups invited someone who disagrees with their views on sexual assault and rape culture to speak on campus.

Christina Hoff Sommers, a resident scholar at American Enterprise Institute and author of Who Stole Feminism?, spoke at Georgetown last Thursday and is scheduled to speak at Oberlin tonight.

“Her talk is happening, so let’s pull together in the face of this violence and make our own space to support each other,” the students wrote. “It is valid and necessary to both create alternative spaces for healing and to directly challenge the violence that is happening,”

Get it? Alternative views are really “violence” that makes them feel “unsafe”.

Really, how odious and dishonest and cowardly can these left wing scum get in their strategy to silence and marginalize all who oppose them?