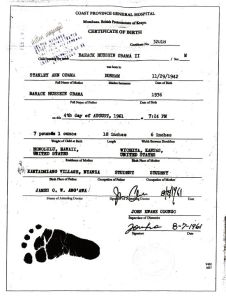 And on July 17, 2012, the results were announced. After having already declared in March of that year that the president’s long-form birth certificate was likely a computer-generated forgery, Arpaio’s investigators could make a definitive statement. Obama’s birth certificate is “definitely fraudulent.”

Now Arpaio faces hearings beginning Tuesday over whether he should be held in contempt of court for disobeying a judge’s orders in a racial profiling case.

Nearly two years ago, a federal judge concluded Arpaio’s officers had systematically racially profiled Latinos in the sheriff’s regular traffic and immigration patrols. Arpaio vigorously disputes the finding, but he was ordered to make changes.

U.S. District Judge Murray Snow has grown frustrated with the sheriff’s office for failing to abide by his decisions, mischaracterizing his ruling and carrying out inadequate investigations into wrongdoing by Arpaio’s signature immigrant smuggling squad. As those frustrations mounted, the judge ordered this week’s contempt hearing.

The contempt case differs from others against Arpaio. The judge has made it clear that the sheriff, whose past legal bills and settlements have been picked up by taxpayers, will have to pay a fine out of his own pocket to atone for his acknowledged violations. Other punishments could come into play, too.

County taxpayers have paid $6.8 million in attorneys’ fees, and the county also has forked over $2.6 million to pay a staff that is monitoring the sheriff on behalf of the judge. Taxpayers also are picking up the costs of video cameras in patrol vehicles and the creation of a fund to compensate people harmed by the violation of the 2011 order that barred Arpaio’s immigration patrols.

It is notable that there has been no update on the Sheriff’s birth certificate investigation since the announcement it was a fraud in 2012. Although there have been hints (in 2014) that he is close to establishing who was responsible for the forgery, nothing further has been declared..