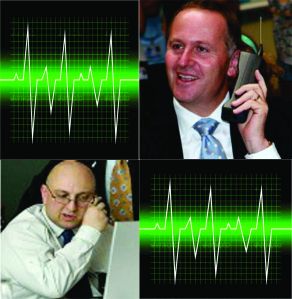 D: The conference is going well.

J: Yes, Michelle was right when she said it was tidy. We’ve managed to crush every last whimper of dissent in the ranks. All go on the flag. Damn poncy Conservative godwhacks!

J: What do your polls say about Auckland housing?

D: It looks like Labour’s moaning about thousands of cashed up commies from the PRC exploiting NZ’s lax overseas purchase laws might win them a few points with the chattering classes. Even in Parnell.

J: OK, well, we’re going to head them off with some feel good shit that should bring the polling back our way.

J: Oh just the usual smoke and mirrors crap. You know we can’t reduce immigration. That would be the end of our “good economic managers” stunt. And there’s those Chinese donors as well. Not to mention the Real estate guys. So we’ll just make some noise.

D: I get it. Something that makes it look as if we’re doing something but really does nothing.

J: Exactly. We’ll introduce some of the usual poorly written legislative crap and tell the punters it will make immigrants keener to go to country centers.

D: Excellent. Who thought of that?

J: I did Dave. You know that. I think of everything.

D: Yes, OK, of course. But why won’t the PRC immigrants go to the country?

J: Hell Dave, these are people who have been living under the yoke of Communism all their lives. You think they give a damn about regulation?

D: I get it John. They’ll just fill in the right forms, laugh their heads off and go live in Auckland anyway.

J: You’re on to it Dave. We’ve checked it out with our donors already. The real estate guys are sweet too. Give it a couple of weeks and then call me with a poll update.

D: Sure will John. In the meantime, Cam and I will smear Labour as much as we can. We just love using those word “racist”, and “xenophobic”. So damn easy, and we don’t even have to think about a rational argument.

J: OK, excellent work. I see those dumb MSM bastards are all running the same line too.

D: Yeah, they’re eating out of our hands.

J: OK, bye Dave. Keep up the good work. Oh, wait, will I see you at the fundraiser at Bill Liu’s place?

J: He was actually, but I’ve fixed it. Those Chicom Generals in Beijing owe me a few favours.

J: OK, make sure Cam doesn’t turn up at Bill’s, I can’t be seen with that tub of lard for a while yet.

D: Given up on that. Hey, one thing, can you see that my March account is paid, its still outstanding.

J: Gotta go Dave, Hillary is on the other line. Wants some advice on dealing with Trump. See you at Bill’s place.

19 thoughts on “Dave and John have a telephone conversation”