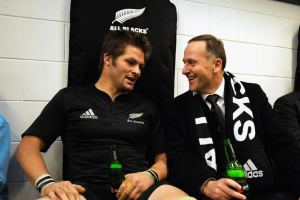 I was surprised to see the announcement of the All Black Team made in NZ’s parliament House.

Oh, but Richie McCaw is definitely into Flag Change. Oh, and John Key’s the man.

Whoever the Rugby administrators were who allowed the All Black team to be used this way should be fired.

I’m already unhappy at the way the All Blacks have been used in recent times as a subtle instrument of apartheid. The dual language anthem and the prominence of the haka, a demeaning performance that no other team in the competition has need of, has irritated me for a long time.

The boys mingling and back slapping with the bunch of spineless compromisers whiners and progressives who currently inhabit our parliament building was nauseating to say the least.

Don’t be mistaken readers- this was a propaganda event. Richie and his boys were used by the NZ govt, National and John Key if you like, as propaganda tools. Sure Labour and everyone was there, because it would have been impossible to do it otherwise, and too openly seen for the political ploy it really was.

John Key told us a few days ago we shouldn’t talk down the economy, that is now straining under the burden of debt we should never have entered into. When the dollar was up, it was a vote of confidence in the NZ economy. Now its down, its a the long awaited rebalancing that’s going to help our exporters.

Its clearer every day that the National Party is just selling us the same old vacuum cleaner and all they’ve done is wrapped it in shiny new packaging.

The flag change is part of that. The All Blacks are part of it. Its all just weak socialist spin to disguise the fact that we’re governed by the same bunch of clueless commie monkeys as we were when Helen Clark was PM.

4 thoughts on “All Blacks used as propaganda”

Climate Change research in elite American universities is being funded by Communist China. If we had a real media in New Zealand, it is certain we would know this was also a major problem here. Communist journalists working for Stuff and Newshub and TV One and the Herald and Radio NZ are all happy to […]

Suhayra Aden should be charged with treason

The West have persistently voted soft weak globalist liberals into power, and the latest example is New Zealand’s Jacinda Ardern, who has just made a major concession to Jihadi terror. Not only has Ardern allowed the traitor Suhaya Aden back into New Zealand, her officials have already said a proposed “investigation” will not result in […]

South Africa- a deception we have yet to learn from

The New Zealand media has published a number of articles to celebrate the 40th anniversary of the cancellation of the Springbok rugby match in Hamilton, and later the end of apartheid in South Africa. In terms of democracy, one man one vote is the standard, and leaving side those born in the country, if you […]