Screen captures of newspaper articles, mostly from before his presidency, that describe Obama as Kenyan born. The first pic is actually from a biography Obama approved for publication himself in 1991. 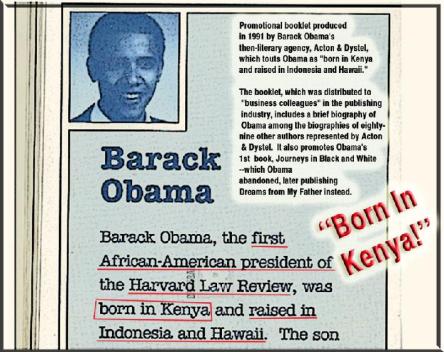 The Nigerian Observer-Americans will today go to the polls to elect their next President with Democratic Party candidate, Senator Barack Obama largely favoured to win. The “Kenyan-born” Senator will…”

The Ghana Times — “So far, the odds favour the once underdog in American politics, Obama, the “African-American Senator” from Illinois state. A Congressional Quarterly (CQ) politics monitored on BBC put the “Kenyan born” American ahead of his rivel, John McCain.”

GraphicGhana.com — “For Ghana, Obama’s visit will be a celebration of another milestone in African history as it hosts the first-ever “African-American President” on this presidential visit to the “Continent of his Birth”. The same article, with the same quote, appeared in ModernGhana.com.