It’s never really been about what the left are in Western society today, its about what they are capable of becoming. Leftists who might read this and turn away should rather read on, because the reality is those who believe in the soft tyranny they impose today are going to be victimised exactly the same as we who oppose them, as the socialist monolith rolls along to its inevitable ghastly conclusion.

Sure, the left are responsible for poverty and division and national decline in any country where they become ascendant, and that destruction is not to be made light of. They’re capable though of much worse. History has shown us time and time again that the left will build big all powerful governments/ states, and then use that power to crush opposing ideas. First softly and gradually, and then by means of widespread murder and even genocide. 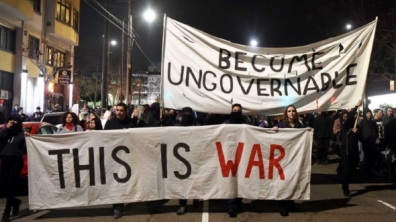 This site has written often about the methods the left habitually use to reach their national and global socialisation objectives, and in most cases this has included the gradualist strategies of Cultural Marxism and Critical Theory, a means to an end we today see exampled in Venezuela. For decades, socialism has been the only idea permitted there.

Even now, as the country collapses in an easily predictable economic disaster, there are no real ideas under discussion in Venezuela other than different forms of socialism. The country is practically bankrupt of any alternative political solutions. Ideas outside the permitted left wing political spectrum were expunged decades ago, and we have generations there who do not know how to think otherwise.

Now, after the period of enforced totalitarian thought, the murderers come out, as Venezuela enters another stage, the advanced stage, of socialist infection. This is when the movers and shakers of socialism have to deal with those resisters who have, after all of the left’s efforts in brainwashing  by means of a corrupt media, by indoctrination of youth through the corruption of the education system, failed to succumb. The intransigent thinkers who after all of the left’s efforts, still value liberty and individualism and capitalism, have to be dealt with. And the only way left is to kill them, most often in the streets.

In the twentieth century, over 100 million citizens of various countries were killed by leftists because those citizens would not succumb to socialist ideas. Obama mentor and left wing icon Bill Ayers had a plan to implement Communism in the US, and it included the killing or internment of “around 25 million Americans”.

Leftists have for a long time believed that the reason socialism fails is that counter-revolutionaries, (non-believers) can always escape it. Move to a better part of the world. This is the thinking that drives their globalist endeavours. They are fully focused on ensuring that this time, there will be nowhere to run.

Socialism today is a global event, and unfortunately, the believers have achieved their objectives in a majority of Western countries. The UK, Canada, New Zealand, Germany, France, and so many other countries that were once politically pluralist, have yielded, and counter-socialist parties, even if they exist, have little support. A couple of exceptions are Australia, where resistance still exists to an encouraging extent, and the United States of America. There, it is the framework of the Constitutional Republic that most frustrates the left’s ambitions.

Donald Trump’s election shook the global left to their core. After the victory of the closet Communist Obama nine years ago, they were planning on a seamless transition back to the Clinton regime, and for the monolith to keep trundling on. Slowly but surely, the tried and true socialist objective, the extinction of all other political ideas, would be achieved in the US.

Trump’s victory and ensuing events have woken the sleeping giant, not just in the US but all over the West. His victory gave hope to anti-socialist forces and brought despair to the believers.

So now, we see the beginning of the left’s counter offensive. This reversal must be repaired, and quickly before the counter-revolution gains momentum. Hence we see right across the West, but more intensely in the US and Australia, the rise of the violent left wing street thug. The neo-Bolshevik.

Antifa and like violent groups are a result of the slowing of and resistance to the left’s long time strategy of Cultural Marxism/ Critical Theory. More and more people are awakening, and the left are disturbed and maybe even frightened. So they’ve short-cutted the usual gradual process and brought their customary violence to the fore. Make no mistake, what we are seeing in the US today is an attempt to initiate a violent Communist uprising.

Antifa is primarily about the left owning the streets. Its about sending a message. Resist us and you’ll end up hurt or maybe even dead. One should not mistake Antifa for a rag tag bunch of non events. Sure, the ones in the street are largely ignorant uneducated thugs, but they’re being manipulated and directed by much more intelligent and cunning forces at a higher level, and those forces extend right into the upper echelons of the US govt. And of course the mainstream media, the bureaucracy, and academia.

Especially academia. For decades the West has turned a blind eye to the subversion of its primary, secondary and tertiary education system by Frankfurt School Cultural Marxists, and what we see today is the result of this blindness. The violent indoctrinated thugs in the streets are a product of a treacherous education system that has been used by subversive political agents to white ant Capitalism and the free West.

Here are examples of what those defunct and dysfunctional organisations once called universities have produced. Millennial attitudes to freedom of speech have been surveyed frequently, and they show a basic contempt for that principle that is the foundation stone of the free West. In the US, statues are pulled down and history is distorted and attacked, with the end objective there being the destruction of the Constitution (the greatest historical document on liberty ever written) and the imposition of a new communist Republic.

Non-leftist accounts are closed down on Facebook, Twitter and Youtube. Paypal refuses to operate as a funds collector for internet outlets it categorises as “unsafe”. These institutions, which owe their existence to capitalism and the free West, are deeply infiltrated and controlled by a generation of brainwashed millennials, so stupid, so ignorant, so indoctrinated at the expense of their education, they cannot even see they are committing suicide.

In most Western countries, sly cowardly unidentified communist subversives will send Police to knock on your door or even arrest you if you comment on social media or blogs (or even in the mainstream media) in a way they do not approve of.

We will all be imprisoned if this force in our schools and universities, our media, our government, shutting down free speech and thought, and now spilling blood on our streets is not defeated. And as the opening paragraph to this essay points out, those who today support the left’s soft tyranny will be in as bad a position as any non-believer.

Stalin’s thugs impoverished and terrorised a whole nation. Millions of his supporters died along with those who always resisted. Hitler too killed so many of those who initially voted so enthusiastically for the National Socialist Workers Party. Pol Pot and Mao purged millions of their supporters. Even today, the thug govt of Red China holds power by universal terror and frequently kills off supporters within that framework of terror. In Venezuela, all are suffering.

The disgusting betrayal and cowardice of the free West by the likes of  (locally) Lizzie Marvelly, and (internationally) Lily Allen Ashley Judd and Madonna and Sean Penn and so many other repugnant entertainment sector Communists will not save them from the same fate that befell all of their kind once a firm tyranny had been established.

Like betrayal by those who run and censor social media such as Twitter (Jack Dorsey) Facebook, (Mark Zuckerberg) and Google will not save them. The shadowy forces pushing this whole evil scenario see them only as useful idiots, and they will be eliminated as soon as their usefulness has expired.

This article has been written under a sense of growing apprehension for the survival of the West. We have the beginnings of a major crisis on our hands, and in most cases our political representatives seem blissfully unaware of what is looming. Too many are compliant, and even worse, many are conniving at the violence, the thuggery, the lawlessness, that should wake them up by its similarity to past events, in Russia, Germany and so many other countries where the left took power by force.

Right now, violent thug Communists own the streets in the country that was once a beacon of liberty to the rest of the free West. Think about that for a while, and then maybe you will reconsider whether you think this post is an over-reaction.

It is so disappointing to see ACT refuse to challenge the Climate Change Scam. One would have thought, with their professed focus on small govt and less spending, they would take a clear stand against something that massively increases govt power and is already costing consumers millions in fees and charges that are in actuality […]

This video is just an unknown guy talking, but by reason of his logic, he’s sounds pretty credible. Picked the video up on Gab, and have no idea of its origins or I would post an acknowledgement. However, he’s a master of plain talking and in two minutes makes one of the best cases I […]

A friend alerted me to a Radio NZ interview with the progressive media’s favourite object of hatred, Pastor Brian Tamaki. The “interviewer” was hard leftist Lisa Owen, and she harried and harassed Tamaki through the whole interview in a totally unprofessional and personally prejudicial manner. Lisa seemed to be projecting her own personal hurt, in […]