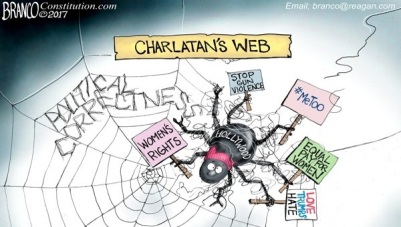 Its a mystery how the left, once they gain power in any country or state, frequently manage to retain that power for a surprisingly long duration. Even when their policies cause deprivation and destruction, people inexplicably still keep voting for them. What is the answer to this mystery?

Take California for example. Extreme leftist Gerry Brown has been a disaster as Governor, but he is now in his second term and counting his two earlier terms, is the longest serving Governor ever in California.

An example of his bad governance is Brown’s typically destructive fixation with the mythical issue of global warming, and this fixation has been devastating to business in the state. In 2000, California produced 5.6 percent of all U.S. manufacturing investment, but today it’s only 1.8 percent. The overall standard of living in California cannot possibly improve while investment is falling like this. Productive people are leaving in droves, thereby significantly reducing the positive payer tax base, but amazingly, Brown still leads in the popularity stakes.

Or for an even more obvious example of lemming like suicide by voters, you can look at Venezuela. For years it was clear the country was sinking at an accelerating rate, but the majority kept voting left and even now, when the middle class is scavenging on rubbish tips for food, socialist candidates are still the preferred option.

So why this weird reluctance to move away from left wing governance, even after it has been proved a disaster? There are a few reasons, but the main reason is the narrative.

The narrative is what people talk about when they’re talking politics, or economics, or society. The issues people vote on. Leftists put immense effort into controlling and delivering the narrative, and this is the main reason they manage to stay in power for so long. With friends in the media and academia, its easy for them to lead the discussion, and rather than talk about issues that matter, they insure the topics of conversation are focused on relatively minor issues (that mostly arise because of Critical Theory or Cultural Marxism).

Real issues are deliberately not discussed, because if they were, the conversation would all be about social disintegration and economic decline. Instead, its racism, or modern feminism, or multi-culturalism, or global warming or renewable energy or gender or bullying or confederate statues or a thousand other things that don’t really matter as far as our real circumstances are concerned, yet serve to divert the public’s attention from poor governance.

So come election time, people’s heads are full of rubbish, and political campaigns are based around this rubbish, and voters make their decisions because they’re fooled into thinking these rubbish things matter. Worse, because they mostly fall into the trap of being reactionary, opposition parties will find themselves forced into discussing exactly the rubbish the left want them to.

So controlling the (mostly false) narrative  is the main strategy the left use to extend their period of political power in any place they govern. The strategy’s three central components are a politically corrupted media, a mainly sympathetic academia, and a cynical political force asking for votes. Long lasting socialist governments are always a combination of these three groups.

How to combat this strategy? Well, the most obvious solution to is to reject the issues they want to talk about. In other words, tell them to shut up. Tell them they’re boring. Its true. They are. The left’s endless whining about non-existent issues is a monotonous dirge. Who needs it?

Just think. Not so long ago, none of these issues were of major public concern, and things were going quite swimmingly. Why then are they so important today? Because the left have made us talk about them, and think about them, and we have in the main, fallen for this subterfuge.

There is in fact only one issue that really matters and that is how well your personal standard of living is progressing. Are you safe from crime and violence? Are you being protected from international threats? Are you earning well and are you keeping what you earn?

These are the only concerns govt should be focused on, and apart from a few other issues that they might convince you they must have a part in (education and health for example) nothing else matters. As it didn’t matter fifty or sixty years ago.

The way to stop the left from maintaining their grip on power is to reject the deliberately distracting issues they and their media and academic allies want us to talk about.  Reject conversations about side issues that are cynically designed to drag down the level of political debate and thereby extend the left’s hold on power. Tell them they’re bores and to shut up and go away, otherwise, they’ll hang around for ever. Or at least until they’ve ruined everything that was ever good in our societies.