“Money money money, must be funny, in the rich man’s world.” So goes the old Abba song, but there has seldom been as much funny money afloat in western economies as when the climate scam became mainstream.

The knack to investing is being ahead of the curve. You need to see the wave coming and catch it. Once its arrived, its too late, the opportunity is gone. So investors a decade or more ago looked at the purported / predicted climate change threat, and thought “here comes the next wave” and they jumped on it.

Some investors were cynical opportunists, but many were genuine believers in the threat, and saw themselves as helping to solve a major global problem. So money poured into any idea that was based on green ideology, and climate change in particular. The largest investments of the new green wave went into ideas aimed at reducing CO2 emissions.

Renewable energy in particular was seen as the in thing, and billions of dollars world wide poured into that sector.

The abject mainstream media had bought fully into the Catastrophic Anthropogenic Global Warming (CAGW) drama. Media company owners who also had investments in the energy sector were happy to push the threat. Journalists working for those companies, most of them left wing, also pushed it because of the one world socialist good they imagined they were supporting. Academics pushed it for that reason too- the collective good.

Then, it all began to go wrong.

What the huge pro- CAGW crowd never reckoned on was the declining influence of the mainstream media and the corresponding rising influence of internet news sources and/ or social media. This new information source reached out to billions all over the world in a spectacular transformation of the news and opinion cycle.

As a part of this information revolution, voices that opposed the consensus on climate change made themselves heard, and by sheer force of logical argument, became a powerful force themselves. Suddenly, there was doubt, and the doubt grew into firm opposition, and now there are two sides to this story out there. Not one as there was when the “catch the wave” investment decisions were made.

The truth is now at issue, but the problem is that if the truth that “CAGW is a crock” wins the argument, billions of dollars stand to be lost by investors and their companies all over the globe.

There’s more though, and that is in matters of investment, the web is deep and sticky. So many different people, in so many walks of life, and in so many inter-connected industries, have all made major investments in the CAGW scare, that confronting the truth that it is all a scam will cause unimaginable economic disaster.

We have the media, whose owners all have deeply invested in CAGW through other investment vehicles. We have the banks, who have all financed or underwritten CO2 abatement schemes to the tune of billions of dollars. We have politicians, who have put their political survival on the line by backing CAGW. Some of these politicians are no doubt investors as well.

We have companies, small and large, who will go broke if the impetus to combat CAGW is broken. (see so many supporting the cause with sickening self motivated statements and or associations purported to be for the public good) Their employees’ jobs are at risk.

Then we have a huge number of regulatory govt departments, local and state also with thousands of employees who will be out of work if the scam is exposed.

In particular, we have the science sector of the public service, who have never in their lives seen a gravy train that fed them as fast and wells as the CAGW scam. Naturally, they’d be deeply opposed to any ending of activity to combat CAGW. What on earth would they do for a crust after?

Last but by no means least we have the ambitions of the United Nations apparatchiks who never saw the CAGW scam as anything but a means to implement socialism, or wealth redistribution, on a global sc 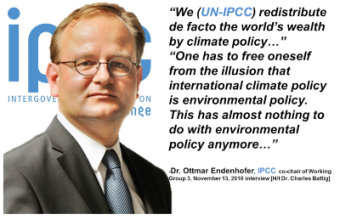 ale. If we bin CAGW, their ambitions are dashed.

So in the above is as brief an explanation as is possible on why it is so difficult to bring the truth that CAGW is a scam into the public arena, and why stopping the tidal wave of misinformation and frequent outright lies is so difficult.

The forces opposing truth on this issue are overwhelming. Investors including the globe’s biggest companies and banks. Media and its subsidiaries. Politicians, both left and right. Academia. The public sector & science depts. Its propaganda and its inertia and momentum, like a spinning flywheel, extremely difficult to halt.

On the other side, we only have truth. Truth, and the dedication of good men to that truth. That’s why the CAGW side will lose. It might indeed be in this case a matter of time, but the truth always wins.

People with investments in CAGW need to start looking for the next wave. This one is spent.

4 thoughts on “Climate change today is all about cronyism & money”

Its a common theme among people who have been victims of communism- they acknowledge that the communists were a minority, and they regret they did not do more to fight them at the beginning. Once they have control, its too late, as millions of graves in Cambodia and the Soviet Union and Communist China attest […]

The vomit inducing NZ mainstream media is up to its usual tricks. Pushing Marxism under the guise of doing good. In this particular case its been doing it for months, if not years. Critical Race Theory (CRT) is causing a firestorm in American schools, where its recognised for what it is. Outraged parents are fighting […]

National say they don’t want to push NZers out of their cars like Labour, but they still agree with net zero carbon by 2050. In a press release today responding to Labour’s horrendous plan revealed yesterday, the National shadow Transport Minister Michael Woodhouse says- Proposals floated to make the transport sector net carbon zero by […]