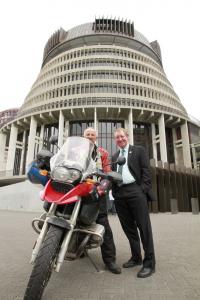 $2 million a year from ACC levies is to be invested in improved motorcycle safety initiatives from a newly formed Advisory Council led by Dr Gareth Morgan, ACC Minister Nick Smith announced today. “This new initiative is about the Government working with motorcyclists to improve safety, save lives and reduce the costs of accidents,” Dr Smith said.

“This initiative is based on international best practise, particularly Victoria, Australia where motorcycle fatalities and serious injuries have reduced by 20% since 2002 when the state government there introduced a specific motorcycle safety levy programme and Council. If we could achieve likewise, it would save 10 motorcycle fatalities per year. I visited the Victoria programme last year with New Zealand motorcycle organisations and learned how investments in motorcycle training, road design improvements, signage and general road user education have made a real difference to safety.

Well sure, its typical of this weaseling little UN sycophant to go running off to the most communist state in Australia for ideas. And what would he learn there anyway, just the same old draconian rubbish. The reduction of speed limits, the speed cameras, the massive fines, the ineffective demerit points system that takes peoples licences, jobs, incomes and homes, the VMAC motorcycle road projects, the un-Australian camouflage operations, the police harassment of motorcyclists under the guise of “operations”, the theft of democracy by giving the unelected VicRoads the power to change law, the massive marketing and advertising campaigns, the medias opinionated reporting and the failed Vision Zero results strategy are some of these extremist initiatives. All the same old big powerful government ideas. That Smith loves.

But wait- The new Victorian government has sacked Deputy Commissioner Ken Lay. The state’s top traffic cop will now be responsible for service delivery and not road safety after a shuffle of the force’s senior positions. The sacking is believed to have been actioned because of widespread unhappiness in the state over the draconian approach to road law enforcement.

And there is more- Provisional road toll data released in the new year shows a significant rise in motorcycle deaths, with 48 riders and one pillion passenger killed throughout the year. Motorcyclists represented 17 per cent of the 2010 road toll, with a 32 per cent increase in deaths from 2009, in which 36 riders were killed.

So Victoria’s solutions re motorcycle deaths are not only draconian, they’re ineffective, and the cop responsible for their implementation has been fired, and this is the pattern we need to emulate? This is where we are going for ideas on how to reduce deaths and reduce ACC fees???

Nick Smith is just another useless National Party Minister who cares not one jot for the principles the Party professes to care for. He runs off and signs up to unworkable unjustified UN schemes, and now he’s suggesting we buy into the disgracefully draconian Victorian road policing system that will not deliver the objectives he seeks anyway. He’s a state worshipping fool, and he betrays what the Party stands for. Another Nat politician who should get the hell out of our lives, or at the very least, cross the floor and join the Labour party.

Its long been apparent he’s got no damn business in a party that professes to stand for small government and individual freedom and responsibility. He’s the antithesis of these principles. But then, that’s the National Party all over these days right readers?? That’s why the fake and charlatan Smith still holds sway in the party. Anyone who might genuinely care for those founding principles, and professed a view the government should abide by them, would last about a millisecond. Damn detestable charlatans.

10 thoughts on “Nick Smith- Another Statist Initiative, Another Bungle.”