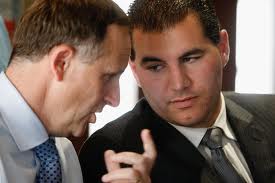 New MP Jamie-Lee Ross opened his parliamentary career yesterday with an excellent speech. It almost reads as if he has been reading this blog. Mr Ross’s speech was a long overdue return to a principled political stance, one that the National Party should hold to firmly but that they currently betray every day.

Its strange that the National Party once had a leader who subscribed to similar principles as Mr. Ross but they dumped Don Brash and instead allowed the leadership to fall into the hands of a vacuous political idiot. Its strange that this idiot now enjoys great support within the National Party. If Jamie Lee really believes the things he said in his speech yesterday, how the hell is he going to get along with his colleagues in the National Party and their empty headed leader, who probably collectively don’t have a clue what Mr Ross was talking about in his maiden speech?

Mr Speaker, I am a staunch believer in limited government. I believe government’s intervention in the lives of New Zealanders must be minimal and only when necessary. I believe the state should provide help to those in need, but on the basis of need, not desire. I believe that government must protect the private and personal security of citizens from foreign or domestic attack. I believe the state should provide access to essential services, like health and education, when the private sector is unable to provide these services profitably. And above all else, we should instil in the nation a culture of personal responsibility and self-sufficiency.

That’s pretty good rhetoric, but how does stuff like that sit within a party of knuckle dragging air headed progressive/ socialist/communist ghouls like National? Not very comfortably I would suggest. There’s more-

Socialism is a failed experiment. The socialist doctrine seeks to close the gap between rich and poor, a reasonable goal. But rather than doing so by incentivising wealth creation, socialism seeks to redistribute the limited resources of wealth creators by using the coercive power of the state. If tax and spend was all we had to do to achieve what we wanted, then every nation on earth would be a glowing utopia of human desire. Clearly, that is not the case. If I may paraphrase Baroness Thatcher, the problem with this approach and the problem with socialism is that eventually you run out of other people’s money to spend. The problem with trying to spend your way towards closing the gap between rich and poor is that eventually we all collectively become poorer.

How does this sit with a party of dumb mutes who daily sit in the house smirking and shuffling and scoring “points” but are notably never heard to seriously attack the concept of socialism? Who lack the goddamn brains and balls to even make one tiny squeak of noise condemning this destructive monster? And here’s a bit that really smacks his vacuous schoolboy leader Key right in the eye-

“I am a New Zealander who believes strongly in one standard of citizenship. It also means that I do not subscribe to the view that I, or any New Zealander of Maori descent, requires special seats to be elected to Parliament, to Councils, or any other body in this country.”

So how does that fit with John Key’s craven supplication to The Maori Party and his simpering deference to the disgusting racists and separatists that lead it? That daily take money from hardworking NZers and spend it on a race based basis amongst their friends and electoral supporters. How is Jamie going to sit on the National Party benches and tolerate this corrupt and venal and contemptible state of affairs??

Even though its broadly a fine speech there’s still much in it I could disagree with, but let’s put that aside for now and give Mr. Ross some credit for the good intent that forms the bulk of his speech.

However the question remains, if Mr. Jamie Lee Ross is indeed the fine and principled politician he says he is in his maiden speech, how is he going to exist in the daily rotting decaying group of politically lost losers and miscreants that today pass as the once powerful and principled National Party? If Mr Ross lives up to the intent of his speech he’s going to have his greatest battles with his own colleagues. Talk is cheap, and we judge politicians on what they do not on what they say. I keenly await the evidence that Jamie Lee Ross is the man he says he is.

16 thoughts on “What is This Guy Doing in The National Party? (sub title Don Brash rides again)”

National say they don’t want to push NZers out of their cars like Labour, but they still agree with net zero carbon by 2050. In a press release today responding to Labour’s horrendous plan revealed yesterday, the National shadow Transport Minister Michael Woodhouse says- Proposals floated to make the transport sector net carbon zero by […]

The New Zealand Security Intelligence Service seem to be right out of control and someone there needs to be sacked. Here’s the story- Ex Prime Minister Helen Clark who lives close to Eden Park, has publicly opposed concerts at the park on the grounds they would be a “home invasion of noise”. Twelve thousand Muslims […]

Labour on CO2 “We can’t continue with business as usual”

Jacinda’s Transport Minister Michael Wood is adamant that NZ must do its bit to reduce CO2 emissions. He thinks they’re dirty, but actually, they’re essential to plant life and other planet survival mechanism. They do not have any significant effect on global weather or temperatures. About as much as dropping a feather into the Grand […]