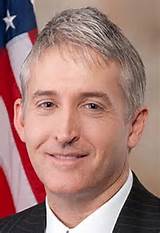 Rep. Trey Gowdy (R-S.C.) released a letter on Friday that said both Republicans and Democrats on his House Select Committee on Benghazi want her to testify about the 2012 attack that left four Americans dead in Libya.

“We also set a deadline for the production of emails, documents or other materials in the possession of the State Department, which would be needed to constructively ask questions of Secretary Clinton and serve as a reference for the secretary before and during the hearing,” he wrote.

The Obama administration famously blamed the attack on a provocative video, but was later forced to retract that statement and admit it was an act of pre-meditated terrorism. Republicans accused the administration of trying to downplay the event in the weeks before President Barack Obama’s second presidential campaign.

The hearing will be of some concern to Clinton given she is reportedly busy organizing a massive campaign committee for her run at the Presidency in 2016.

One thought on “Trey Gowdy goes after Hillary Clinton on Benghazi”