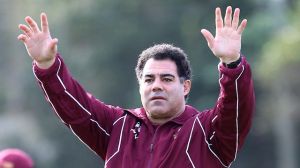 The drug culture is are currently causing a lot of problems for sporting codes in Australia. Mal Meninga has written an opinion piece on the issue for the Brisbane Courier Mail. He says-

“If any player is found guilty of drugs charges as a result of the Queensland Crime and Corruption Commission investigation, that should be the end of their rugby league careers. Zero tolerance might seem like an overly tough stance, given the charges being mentioned are unlikely to draw a punishment from the courts harsher than a metaphorical slap on the wrist.

But being a rugby league player means that you hold a privileged position in society, and it is a position that carries responsibilities to the game, and the people involved in it. In the past, when league has been faced with the issue of players being involved in serious misdemeanours, the opinion has always been that the game should stand by them and try to rehabilitate them, because it was the considerate thing to do.

But anyone who is so inconsiderate of the game’s image and reputation as to be involved in recreational or performance enhancing drugs should have the same consideration shown to them: None.”

I’m not fully in agreement with Mal’s reasoning on the issue but I do think he’s right in that the reason for the growth of the culture is weakness. Either laws are enforced or they are removed from the statute books. Singaporean society enforces the law on drugs, executing pushers and issuing harsh punishments for users. Figures for drug offences in 2014 show a 14% drop on 2013, so it is possible to control these crimes with the right approach, and if the community supports those laws.