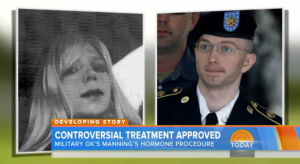 NBC News reports that Chelsea Manning, the transgender Army private imprisoned for exposing national security secrets, has joined Twitter with the help from a communications firm.

The company, Fitzgibbon Media, confirmed that it is handling Manning’s account, @xychelsea, posting messages she dictates by phone and telling her about the responses. Her introductory post went up last Friday afternoon. She finished the day with seven more, thanking friends and supporters, expressing the effort it takes to Tweet by phone from prison, and promising “I don’t want this Twitter feed to be a one-way street/conversation.” By Friday evening she had more than 20,000 followers.

Manning revealed her gender identity as a transgender female while serving 35 years in the military prison in Fort Leavenworth, Kansas for leaking classified documents to Wikileaks. A court ruled in March that the Army must stop referring to her as Bradley Manning and must use feminine or gender neutral pronouns in court filings.

This traitor, who I regard somewhat differently to Edward Snowden, has been given a gender change on the American taxpayer’s dime, and now gets to tweet to followers from prison. I use twitter, I reckon its the best news source there is, but I’m damned if I would want to follow this lowlife, and its amazing to me that 20,000 want to hear from her/ him. Shows you just what is out there doesn’t it?