Shriek horror, run for the hills, stop voting National, vote Green Party. Disaster is upon us and only they can save us.

This is what the NZ Herald is telling us in a typically distorted alarmist article by “Economics” writer Brian Fallow.

New Zealand’s net emissions of greenhouse gases climbed 42 per cent between 1990 and 2013.

Gross emissions, which exclude carbon flows relating to forestry and land use change, rose 21 per cent between 1990 (year zero for carbon accounting purposes) and 2013, to be the fifth highest per capita among 40 developed countries.

If New Zealand is compared with other countries on a CO2-only basis, our emissions are 20th highest among Annex 1 [developed] countries and below the Annex average, at 8.3 tonnes CO2 per person.”

In fact NZ’s main source of emissions is cattle (sheep cows etc) farting and belching. And that we have so many cattle and sheep is why our per capita emissions are at the rate they are. Which is in actuality SFA, and when it is this source that is our biggest contributor then in spite of the shrieking of Brian Fallow and his buddy Russell Norman and the NZ Herald, then I am not worried!!!

The govt reckons we produced 81 million tonnes in 2013. Know what the globe produces? I’ll tell you, about 4000 million tonnes and its falling. And for where we really are in the world check the chart below. 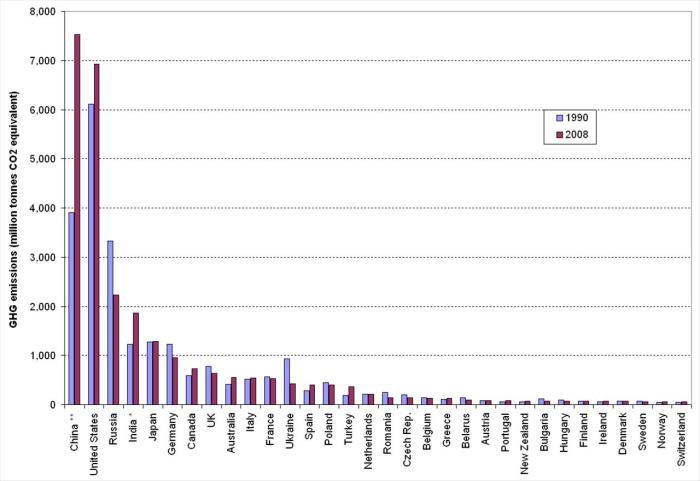 The hysteria over greenhouse gases, which are yet to be proven as a driver of climate change anyway being just 0.04% of total atmospheric gases, is just partisan political garbage from propagandists posing as journalists/ reporters. And they wonder why we hold them in utter contempt.