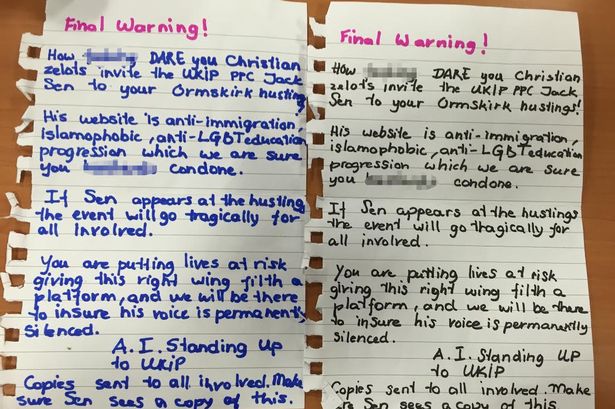 The West Lancashire UKIP candidate Jack Sen has pulled out of election meetings after being threatened by someone claiming to be a member of the group “Standing up to UKIP”.

The threatening letter was sent to the candidate and also to a number of local newspapers.

“Stand up to UKIP” say they exist to “Call on all those who reject racism, scapegoating and xenophobic nationalism to join us in campaigning against UKIP.”

Mr Sen has come under fire recently for his position that “our political, academic and media elite are complicit with sexual violence against children. That by pushing homosexual/sexual education on children and turning a blind eye to grooming and gang rapes, our ruling class are facilitating the crimes.”

A spokesperson for Stand Up to UKIP said: “”Stand Up To UKIP had no knowledge of threats made to Jack Sen, UKIP candidate for West Lancashire and certainly do not condone this.

“Our campaign supports challenging UKIP’s politics of scapegoating through robust debate and peaceful protests not threats or intimidation.”

I think the letter is a good example of what the establishment represents these days, and how far its guardians will go to protect their stinking progressive status quo.