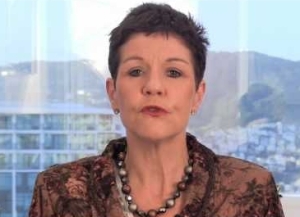 This actually should not be happening. We are not yet in a complete state of tyranny. A man (or woman) should be able to run a TV/ radio show without having government cultural watch tower guards write him intimidating letters that infringe on his right to freedom of expression.

Henry’s crime against the state wasn’t even very major. He merely remarked that he was disappointed to see that Hillary Clinton was using her womanhood as the main plank of her run for the US presidency, which is a damn fair criticism.

The President of the USA or any country should not be selected on gender. We’ve just had one selected on race and look what a disaster that has been. Henry said-

…the former secretary of state should be running on being the best person for the job, regardless of her gender.

Other high-profile women had “fallen into the same trap,” Henry said.

“Helen Clark has talked of her desire to become the first woman at the helm of the UN – not her desire to do the best job she can as the secretary-general.”

Henry questioned why these women did not realise “feminism has come further than they have.”

The “whole idea of feminism” was that someone should get a job irrespective of their gender, because they were the best candidate, he said.

What Henry said wasn’t even that confrontational to feminist mores. But all that isn’t the damn point. He should be able to say what he damn well wants without arrogant jack booted watch tower guards like Equal Employment Opportunities Commissioner Jackie Blue writing him intimidating letters and threatening him with the weight of govt action backed up by her horrible little power crazed den of PC lick spittles. (not said but implied)

Jackie Blue is an ex National Party politician and one would think she would have the common sense to stand against this divisive Marxist nonsense but as always, we’re disappointed in expecting something different from National.

The complete letter from Blue is below. One may argue the issues in the letter if one wants, but that is missing the point. These govt employed petty tyrants should not be writing to other NZers in this intimidatory manner. Not in a civilised and free country anyway. And that’s what we are isn’t it??

You are wrong. Feminism hasn’t come further than Hillary Clinton and Helen Clark, feminism will only ever go as far as they and other women go.

On your show today you argued that feminism has come further than Clinton and Clark, two women who are campaigning respectively for roles as the United States President and Secretary General of the United Nations. Clinton has voiced her ambition to become the first woman US President and you saw this as an outdated thing to say. It isn’t.

Feminism is a belief that gender should not limit anyone’s chances at life and quite frankly people are deluded if they believe women currently get the same opportunities as men to make it in business, politics and the like.

If we have come as far as you say we have why has female representation in our Parliament been stuck at around 30% since the first MMP election in 1996? Why did it even go backwards at the 2014 election? Why is the percentage of female directors on the NZX listed companies a paltry 14%? Why is it that there is a persistent mean pay gender gap in the labour market of around 14 %?

Only yesterday lawyer and international public servant Vicky Robertson was announced as the Ministry for the Environment’s new chief executive, however the headline just described her as a “Former Hockey Player”. I can’t help but wonder if this headline would have been the same if she were a man.

There is a lot of work to be done.