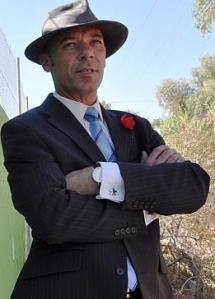 (Assuming this report is factual) Is this the first sign of a citizens rebellion against our politically correct justice system where law enforcement is increasingly applied on race and cultural grounds?

ALICE SPRINGS police are monitoring a self-described paramilitary group which claims it wants to see crime and anti-social behaviour in the town reduced to an “acceptable level”.

Gary Hall, a spokesman for the Alice Springs Volunteer Force, said members were armed, but he refused to go into any detail about their weapons.

“I’m only the spokesman for them and I’m sure that giving away their technical capabilities wouldn’t be something they’d like to see published.

“But I can confirm they are armed,” Mr Hall said.

He also declined to discuss the group’s membership, other than to say it had sufficient numbers to carry out its objectives. “We don’t have a force of 500 men but it’s not three blokes sitting in a coffee shop smoking cigars,” he said.

“The objective of the Alice Springs Volunteer Force is to bring into the line the anti-social behaviour and the criminality into what we would deem an acceptable level.”

He said neither political party recognised the true extent of crime and anti-social behaviour in Alice Springs and police were “restrained” by management from doing an “acceptable” job.

When asked if racism played any part in his organisation Gary Hall said “Alice Springs is divided into two groups of people; good people and bad people, and we’re interested in the latter. If you’re a law-abiding citizen then you have no concern from the Alice Springs Volunteer Force.”

Wonder if NZers will rise to the occasion. So called Maori gangster groups are running riot here, intimidating citizens using the road, making Mafia threats against lawful businesses, and the Police do nothing. When we all know that if it was you or I who tried such things on we’d be in a jail cell in a millisecond.