The political class are growing increasingly concerned about Donald Trump. His latest proposal, to put a temporary halt to all Muslim immigration, has got them screaming from the rooftops in a frenzy of knee jerk outrage.

How dare Trump confront the Constitution and the Bill of Rights by discriminating against religion….!!

Funny isn’t it, how suddenly these Progressives who have never previously given one damn for the Constitution, and have described it as an outdated document that should be binned for ever, have no shame in using it to support their argument.

Their complaints are all hollow of course, as the Obama administration’s immigration policy already discriminates on religion by preferring Sunni Muslims, and although it talks about giving preference to Christians, in fact Christians seeking refuge from Syria are not taken.

The Constitution applies to Americans, not to people from other countries who want to come to America.

As for the argument that Islam is a “faith, or a “religion”, more incredibly uninformed balderdash from half educated Progressives. Religion is only a part of Islam.

In reality Islam is a political movement carrying a whole framework for society. And in any country where Islam has gained a foothold, they have implemented this framework to the destruction of whatever the local law and government specifies. Here’s a table that spells it out- 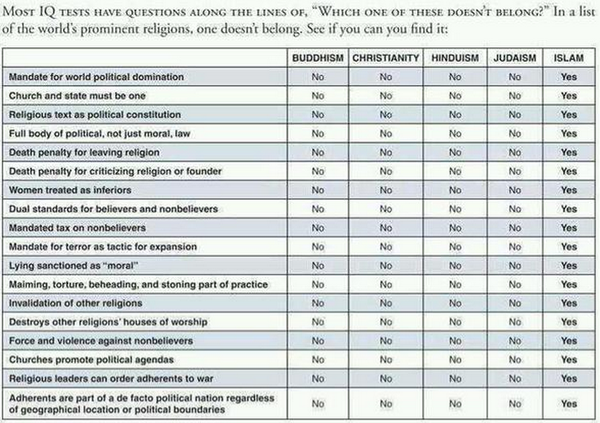 Of course the real issue with Trump, the real reason he sends the political class into a frenzy, is that he constantly breaches the Berlin wall they have built around political discussion. If you haven’t picked up on it lately, the word from our betters is that multi-culturalism is a good thing, and no dissent with that POV will be tolerated. Trump has fearlessly challenged that decree, and the voters are supporting him with an increased lead in the polls.

(over on Kiwiblog, Mr. Farrar has for about the third time dissed on Trump, making sly Nazi references, and condemning him as desperate. For someone with a reputation as NZ’s best poll guru, he seems remarkably out of touch)

Whereas feminists often talk about breaking the glass ceiling in the workplace, Trump is doing the same thing in politics. Completely wresting the talking points from the vapid MSM and the one party Republican/ Democrat combine that we’ve had to tolerate for far too long.

The Republicans and Democrats have, like most major parties across the West, for too long collaborated with Islam in its mission to subjugate us.

Trump is giving us more choices, and that my friends is what the totalitarian Progressive bastards are really so angry about.

Mr Seymour may be the flavour of the month to a lot of disillusioned National Party supporters, but there’s always been a question over his real commitment to liberty. Surely he should support the people having a voice on the changing of this country’s name. However it appears he does not. The Labour govt has […]

Faafoi won’t talk about hate speech since his last interview a month ago where he made it clear he was completely clueless on steering the law into legislation. He’s gone to ground, and with similar silence from just about everyone else in govt, its clear the decision is to hand the problem to uniformed police. […]

New Zealand media would deny allegations of green left bias, but the evidence is overwhelming. For example, when renewable energy is such a hot topic right now, a search of NZ news shows no mention of a major battery fire occurring at a Tesla power project in Australia. The event was reported on numerous sites […]