The Communist Chinese are at least up front about it. Their “social credit” scoring system, introduced in 2014 has been well publicized. The watchtower guardians of the communist govt down tick or uptick online comments and other social behaviour and severely penalise citizens who accumulate persistently negative scores.

Still in the pilot stage, its intended to become fully operational in 2020. So far though, about nine million people with low scores have been blocked from buying tickets for domestic flights. Another three million are barred from getting business-class train tickets.

Naming and shaming is another tactic available. A a 2016 government notice encourages companies to consult the blacklist before hiring people or giving them contracts.

“Progressives” in the West beat China to this system by at least three decades, and its been operating pretty effectively ever since that political class have become politically ascendant. Most Western countries, Canada, UK, Australia, New Zealand, USA, for a few examples, have embraced similar systems since the 1980s.

A recent example. Ex NZ Reserve Bank Governor Don Brash, a law abiding citizen, one time leader of the NZ National Party, was banned from a speaking engagement at a prominent govt funded university. Brash is a campaigner against race based legislation, and once said in a notable speech –

“The topic I will focus on today is the dangerous drift towards racial separatism in New Zealand, and the development of the now entrenched Treaty grievance industry. We are one country with many peoples, not simply a society of Pakeha and Māori where the minority has a birthright to the upper hand, as the Labour Government seems to believe”

For this statement, the Progressives have typically labeled him a “racist”, and its a pejorative appellation that they will apply to him until his death and after. Don Brash also said this –

“British immigrants fit in here very well. My own ancestry is all British. New Zealand values are British values, derived from centuries of struggle since Magna Carta. Those things make New Zealand the society it is.”

If this was China, Don Brash wouldn’t be going anywhere by plane or train. As it is, in New Zealand, Brash will only suffer the denigration that is directed at anyone who challenges “Progressive” social ascendancy, and includes being mocked in the mainstream media and generally ridiculed by all of our institutions that are pretty much, like Massey University, under the control of “Progressives”.

Somewhere on the net there is a picture of a man in Queen Street Auckland in the late nineteen fifties or early sixties. He’s riding a motorcycle helmetless, with a dead deer strapped to the pillion seat, and he has a rifle slung across his back. It was completely unremarkable then, but like most Western democracies, New Zealand has over the last sixty years or so, developed such a highly regulated Orwellian society that today such an event would result in a SWAT team call out.

Citizens will be vigorously prosecuted if another citizen takes offence at something they may say. Eagle eyed self appointed cultural guardians inhabit social media watchtowers and will, like the Chinese Govt, identify and persecute (and often also prosecute) transgressors. The big tech corporations that overshadow our society today regularly ban users that don’t conform to “progressive” dictates, and fire employees for thought crime.

The Police and Justice system is almost completely unable to maintain a lawful society, because it spends much of its time, like big tech, chasing thought and speech crime. Mostly as a result of false allegations of white supremacy, racism, or such from hordes of screaming brainwashed “Progressives”. (example: attacks on Southern/Molyneaux )

Actors are blacklisted. Sports people are sent on “re-education” courses. News media refuses to employ journalists who don’t conform to “progressive” political ideas. Conservatives at universities are as scarce as rocking horse excrement. Secondary and primary schools have been converted to green/ left indoctrination camps, while literary and numerical scores plummet.

The bottom line is Western society today could teach the Communist Chinese a hell of a lot about “social credit” scores.

“Progressives” are largely ignorant of the political origins of the term. It comes from 19th century Marxist ideology and was particularly prominent during the mass murderer Stalin’s rule over the Soviet Union. A period that also brought the term “gulag” into Western society.

The left learned some valuable lessons from the collapse of the Soviet Union. One was that violence was a largely ineffective political measure. Another was that communism, socialism or progressivism, would only work if it’s ideas were applied globally.

So the communists have never really abandoned their mission. They still seek global domination, but they employ more sophisticated methods. Gradualisation and propaganda are the main tactics. They still have their actual gulags, in non-democracies like Cuba, China and North Korea. However, in democratic countries, they need something else, and so we see widespread cultural and social condemnation of any citizens or institutions that stand in the way of their one world Nirvana.

The internet appeared in the eighties, and provided an opportunity for fightback against “progressive” cultural tyranny, It gave many of us hope for a new emphasis on liberty and small govt in the West. Today though we see an increased effort by the progressives that threatens to shut down dissent on this front and so many others. They’re fighting back, tooth and nail, and sadly, they appear to be winning. The Free West is under assault from within and without, and probably in its most perilous period ever.

The organisation we call the mainstream media is an unending stream of Marxist propaganda and lies. Pravda journalists were forced to print lies. Today’s disgusting impostors in the media (apart from a few) lie because they want to.

The worst of the situation is the failure of our counter-left parties to mount any kind of effective offensive. For example, the NZ National Party has slavishly embraced almost every feature of progressivism, and after the disastrous leadership of Bolger and Shipley, sank even further into the mire with its most recent leader/PM (John Key) unbelievably describing it as a “progressive” party.

Discussions on the internet are ultimately unproductive and its a medium that will soon be under the full control of the left anyway. Unless an effective and vigorous parliamentary alternative to progressivism arises soon, its all over Rover.

The answer obviously doesn’t lie in any of the current parties who claim to be anti-left. Look at the slithering treacherous traitors who call themselves the UK Conservatives for perhaps the most prominent example of this truth.

Never forget Alexandar Solzhenitsyn’s treatise “how we burned”, where he laments how lamely Russian citizens succumbed to the terror of Stalin’s bluecaps. 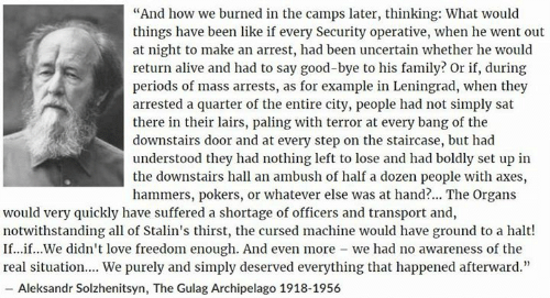 Talking on the internet will only take us so far. Its time for action. If we can’t halt the Progressives and their gulag mentality, then batten down the hatches for a long and terrible ride to a time where gulags will, you can bet on it, become as real in the West as they are in Cuba, Nth Korea and China.