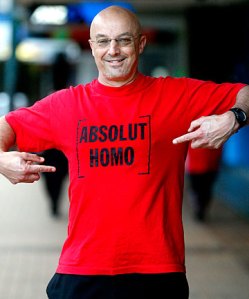 David Farrar writes a ringing endorsement of Kevin Hague’s push to be the Green Party co-leader. Its a bit of a white wash and makes a few statements concerning Hague’s background that are questionable at least. Mr. Farrar claims Hague “is not a communist”. The eminently more famous Trevor Loudon says otherwise.

At Auckland University in the late ’70s, Hague became active in the anti-Apartheid movement and went on to join Halt All Racist Tours (HART). The organisation was led at the time by Maoists (Workers Communist League) pro-Albanian Stalinists (Communist Party) and anarchists.

In 1980, Hague was president of the Auckland University Students Association, also known at the time for its links to pro-Mao militants.

In the mid 80s, Hague served as HART “education” officer. That led him into “Treaty” work. Hague just loves the Treaty of Waitangi. In the late 80s Hague was involved in the extreme left wing group, Pakeha Treaty Action and even co-wrote a book entitled “Honour the Treaty.”

Mr. Farrar says Hague has “significant political skills”, exampled in Hagues work during the campaign for same sex marriage. (DPF lamely refers to it as “marriage equality”) In fact Hague gained a reputation for thuggish and bullying behaviour during the Select Committee hearings, where he was extremely intolerant of any view that opposed his own. (Surprising in a commie right?)

The submission process too was apparently an utter shambles.

Long ago he led the successful campaign to shut down the Auckland Star newspaper for what he termed “hompohobic” editorials, so his record for intolerance and lack of regard for freedom of expression is fairly well established.

Mr Farrar thinks Hague an “excellent choice” for Greens co-leader. For myself, I can’t see how any of the above helps, and it certainly does not give Hague any “green” credentials. I think NZ is far the worse off for having such an intolerant dictatorial bully in parliament, and even worse off if he ever attains any position of leadership. As he demonstrated so clearly when he lead the Select Committee on the Marriage Redefinition Act.

My choice for Greens co-leader is the guy they kicked out of the party a year or so ago because he wanted to divorce it from Marxism. Hay I think his name was.

Recent NZ protests have seen fringe elements comparing Jacinda Ardern and her Labour government to Nazis. Even though such comparisons are a very small part of the protests the mainstream media highlight them. Because it gives media what they yearn for, and that is an opportunity to discredit the protests. Media rightly point out that […]