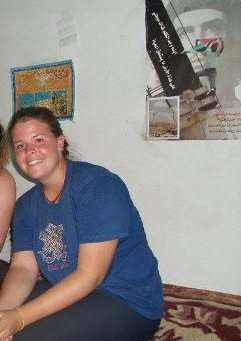 The liberal media can’t wait to make a heroine out of the poor 26 year old girl murdered by ISIS. In fact Mueller was an extreme left activist whose misguided beliefs put her life in jeopardy and eventually ended it.

And you have to ask why a 26 year old girl from Arizona wasn’t at home, happy in marriage and maybe expecting her first or second child and enjoying life among her family and friends.

Kayla’s head was full of left wing bullshit planted there by ruthless, cynical and demented academics who control university campuses and lurk there expressly for the purpose of snaring gullible young boys and girls like Kayla in their evil exploitative net.

Kayla was an extreme left activist divided from her family by a massive culture gap engendered by a politically corrupt education system. She was a long serving member of the International Solidarity Movement.

Kayla Mueller’s work in the Middle East was not that of a humanitarian and non-partisan aid person, but rather, as the ISM statement put it, she “worked with Palestinians nonviolently resisting the confiscation and demolitions of their homes and lands.” She bragged in her internet posts of working in anti-Israel demonstrations in East Jerusalem, in an area which an Israeli court decision recognized as one in which Israelis had a legal right to build homes in. She also supported the throwing of rocks by Palestinians at Israelis, viewing that as a just tactic of the oppressed.

She bought into the narrative that the Israelis were the oppressors and the Palestinians and others who opposed them, the heroes. She wrote blog posts in words not those of a humanitarian aid worker, but of a propagandist for the supporters of worldwide jihad who seek Israel’s destruction.

The tragedy of Kayla Mueller’s life is that out of an idealistic urge to do good, she went to work on behalf of supporters of terrorism and violence who believe openly in a revolutionary route to salvation. Like so many others, back in the United States she fell prey to the overtures of leftist revolutionaries, who are adept at using the aims of young and innocent students who yearn only to build a better world.

Its long past time we freed our universities and schools from the influence of these despicable left wing vultures.

The blockquoted text above is from an article by Ron Radosh on PJ Media.