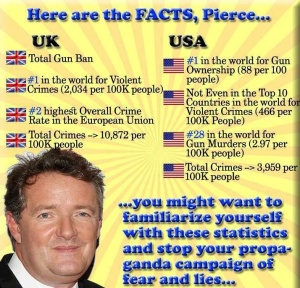 Its not about hunting. Its not even about self defence. Its about citizens having the means to defend against tyrannical govt.

Of course when liberals are informed of this, they’re usual response is to whine, “Well, even if that is true, the huge number killed in America each year by guns hardly justifies that right”.

This too is a statement underpinned by ignorance and prejudice. Compared to the rest of the world, the US’s murder rate is quite low. UN figures show the US rate at just 4.8 per 100,000 people.

By comparison, Honduras suffers the world’s highest murder rate at 91.6 per 100,000, with El Salvador second at 69.2. In Venezuela, that socialist paradise where guns are banned, its 45.1.

In fact the US is 104th in the world. But there’s more. European nations with the highest rates of gun possession also enjoy the continent’s lowest murder rates. Switzerland, Austria and Norway have higher gun possession rates than Germany, Italy and Britain, but their murder rates are substantially lower.

Next time a liberal wants to talk gun control with you, give them a link to this page and tell them to read this before they start.