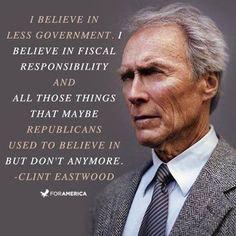 “American Sniper” won just one Academy Award Sunday night after being nominated for six awards. The Clint Eastwood-directed film was up for best picture and Bradley Cooper, who played American sharpshooter Chris Kyle, was in the running for best actor. Neither won, which is astounding, given that ”American Sniper” is now considered the most successful war film ever made. The picture did win one award,best sound editing category.

Since it premiered in late December, the film has grossed a worldwide total of $428 million. The film that beat it for best picture, “Birdman,” hasn’t come close to those numbers, making a mere $76 million since it came out in August.

As usual, Hollywood’s pain in the arse liberals couldn’t leave left wing politics out of it. “Birdman” director Alejandro Iñárritu referenced immigration during his time on stage. Patricia Arquette won best supporting actress, and dedicated her speech to equal wages for women. Of course John Legend and Common won an Oscar for their song “Glory,” which is about the civil rights movement and is on the soundtrack for “Selma.”

Clint Eastwood has made no secret of his contempt for the President. Another who was highly critical of Obama, and especially Michelle Obama (whom she described as a transvestite that everyone in Hollywood knew about) was Joan Rivers who was conspicuous by being left out of the Memoriam Tribute.

So Hollywood liberals used the Oscars to snub those with political views they don’t approve of. Social media was highly critical. American Sniper may not have won at the Oscars but it won the hearts and minds of Americans, and that is in fact a far greater tribute. To hell with Hollywood. We know what they are.

A newly released survey shows that very few citizens of Europe endorse Muslim immigration. Disapproval of Islam is constantly described by the mainstream media as a symptom of “white supremacy” yet this survey indicates such views are by far in the majority or mainstream. Why then are these view also described as “extremist”?? I’ll tell […]

The left are soaking us with lies and one of the worst of late is the “white supremacy” lie. A few rag tag losers hanging around the fringes of society are heralded as proof of a much larger movement whose adherents apparently number in the millions and they are deeply embedded in all facets of […]

A Woke SIS, but will it help keep us safe?