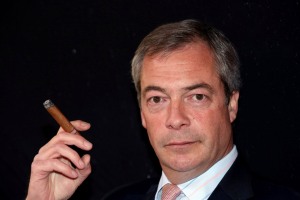 I think Nigel Farage is popular because he breaks through the “right thinking” wall. Progressives in media and politics and academia have constructed the wall with the idea of keeping those who agree with them on the inside, and those who don’t on the outer.

Farage is a popular figure whose support forces the media to report on him because he does enjoy that support, and the more they try to drag him down, the stronger he gets. We know what’s going on here. Farage refuses to think like a Progressive, so he’s out. But we support him, not so much becasue we agree with him, but because we know the Progs are incensed that he constantly breaches their wall.

‘I’m taking on the establishment, and they hate me for it’

‘The media have now become a bigger problem than the politicians. We talk about the Westminster Village in politics, [but] forget it — the media village is even tighter, even narrower, even more inward-looking, and even less in touch with their own potential readership and with the country.’

The media now act, says Farage, like the guardians of ‘what is considered right-thinking’, and this is why they hate him with such rash feeling — his thoughts, his ideas, his politics are, by their judgment, un-right thinking, and thus must be shouted, or better still shut, down.

‘It’s the modern puritanism’, he says of the bossy new politics of lifestyle micromanagement. ‘It’s about controlling people. It is the same paternalistic agenda from the great and the good, who think they know better than ordinary folk what is good for them.’ He says he wants smoking restrictions and other booze-demonising policies kicked out of pubs for the simple reason that the freer a pub is, the better it is.

Roll on Nigel. Its so good to see a politician so utterly unafraid he can actually be himself and not apologise for it.

The full interview is here. (Hat tip to EAD)