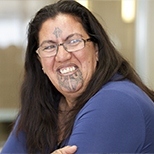 Director of Te Kotahi Research Institute at Waikato University Leonie Pihama called on NZ Maori to speak out on what she described as the “Abbott’s govt threat of shutting down remote Aboriginal communities”.

Recently Australian Prime Minister Tony Abbott announced his government could not afford to keep funding indigenous communities that were too far away from amenities, such as schools or hospitals.

The communities are not being shut down. They can merely no longer expect free money from the rest of Australia. They are free to exist as they have always done and as Aboriginal advocates have always told us they existed, in harmony with the land and free of the influences of settlers (or invaders as some indigenous prefer).

Leonie Pihama called on people to speak out. She suggested Maori could help first-nation Australians in various ways, such as protest marches, petitions, as-well-as writing directly to Mr Abbott. Fine, but Leonie needs to be accurate about what is wanted here. More free money.

There is another issue here. The West Australian govt stated that one of its concerns with the remote communities was the number of cases of gonorrhoea in the 10 to 14 year old age group. When criticised for raising the issue, West Australian Premier Colin Barnett made no apology for using the issue of sexually transmitted disease in an already highly sensitive debate.

“Why would we hide statistics on sexually transmitted diseases to Aboriginal kids? I mean it’s a confronting thing to talk about. But we shouldn’t hide it. That’s not good government that’s not an open community,” he said.

“For too long, for too long politicians of either political persuasion have just said the nice things. And they have not dealt with it,” he said. “And here we are, 30, 40 years on since these debates started in the 1960s and the condition of Aboriginal people has little improved,” he said.

“So I don’t apologise for that.”

Refreshing and courageous honesty from an Australian politician. We need more iof the same here in NZ, and not only from our govt. Academics could do well to follow Mr. Barnett’s example.