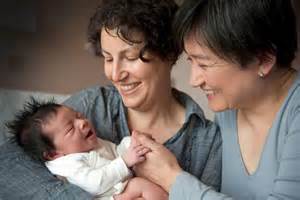 The Sydney Morning Herald reports breathlessly that South Australian Senator Penny Wong has welcomed her second child. The Labor senator shared the news with her 114,000 followers on Twitter this morning.

“Sophie and I are delighted to announce the arrival of Hannah, a sister to Alexandra,” Wong wrote on Twitter. “Everyone is doing well.”

This is the second child for Wong, 46, and her partner Sophie Allouache. The couple, who are already parents to three-year-old Alexandra, announced that they were expecting a second child in an interview with The Advertiser last December.

Wong said baby Hannah was conceived through IVF with the help of the same man who helped them to become parents to Alexandra in 2011. The senator has previously said that the man is known to the couple, but his name will not be released to the media.

I don’t like Penny Wong. Not because she’s lesbian but because she is a typical smug arrogant far left Progressive. Neither do I like these kind of arrangements where babies are farmed out to same sex couples pretending to be normal married couples. What becomes of the child’s relationship to its true father?

It just sounds to me like the ultimate narcissistic ego trip.

Turning crisis into an opportunity