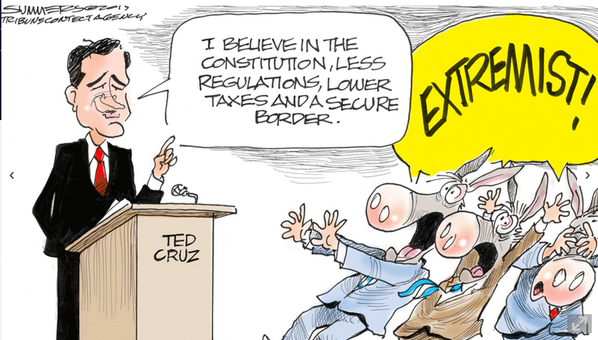 “The 2nd Amendment to the Constitution isn’t for just protecting hunting rights, and it’s not only to safeguard your right to target practice. It is a Constitutional right to protect your children, your family, your home, our lives, and to serve as the ultimate check against governmental tyranny, for the protection of liberty,” Republican Presidential candidate Ted Cruz wrote in an email Thursday, with the subject line “2nd Amendment against tyranny.”

Cruz’s argument that the Second Amendment provides the “ultimate check against government tyranny” is a bit too extreme for potential 2016 rival and fellow Sen. Lindsey Graham (RINO-South Carolina).

Graham backed off when reporters asked if he agreed that the 2nd amendment guaranteed the right to revolt against a tyrannical govt.”I’m not looking for an insurrection. I’m looking to defeat Hillary,” he said. “We’re not going to out-gun her.”

“I think the Second Amendment allows people to protect their homes and their property and be secure in their persons,” the senator said. “I think in a democracy the best check on government is voter participation. I think the First Amendment probably protects us more there.”

It protects RINOs like Lindsay Graham, but try saying something outside the progressive controlled paradigm in media and academia and see how far it gets you. Graham is a left wing weasel who should have gone joined the Democrats three decades ago.

We’re going to see just how far free speech gets you today once Cruz looks like he’s mounting some sort of threat to runs by establishment picks Hillary Clinton and Jeb Bush.