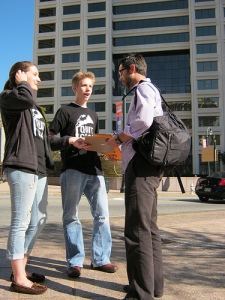 Iona Pannet has a name as a bit of a Watermelon in Wellington council so its somewhat strange that she would comment as she did and imply Greenpeace collectors were harassing passers by in Wellington streets.

Pannett said last Monday that “chuggers” (combined charity and muggers) profit from a form of mild harassment. She says there are ways of encourage fundraising without making people feel uncomfortable.

“I do just worry a bit when it’s about money, and the mechanism for accessing it when there is no consent implied.”

“There’s a bit of pressure that goes on to support the organisation, and it could be seen as a form of mild harassment even if it is done politely and with good intentions.”

Greenpeace fundraising director Laura Hazel has been stung by the comments and has come back with claims that staff are trained to make sure interactions with the public are positive.

“We don’t want people to feel harassed because we are dependent on the donations. It’s not the image that we want to put across.”

“For us it’s also about being able to have real conversations with the public, and just talk about ways that they can get involved if they’re not able to support financially.”

I am happy to contribute to traditional causes like Poppy day and other remembrance events, but I am damn sure I don’t like seeing some Greenpeace jerkoff holding a can out. They’re really not even a charity and if we had any real damn legal system in this country they wouldn’t qualify as such.

They’re propagandising Marxists, in most cases sad naive brainwashed imbeciles so detached from reality and truth its a tragedy. A sorrowful condemnation of our education system and an example of how it has been perverted into a political recruitment device for the new age religion of ecofascism, and they should be banned from public thoroughfares forthwith.