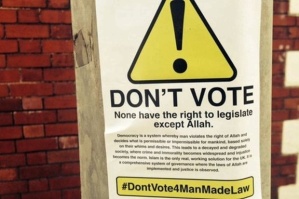 The Daily Mail Australia is reporting that large numbers of posters have been left in the Cardiff (UK) electoral district urging Muslims not to vote in the upcoming UK elections.

They read: ‘Democracy is a system whereby man violates the right of Allah.’

Posters were stuck on lampposts and bus stops across the Grangetown suburb telling the Muslim electorate: ‘Islam is the only real workable solution for the UK’.

Such actions give more reason to ask the same old question, what is it these people want when they come to the West? It certainly isn’t to adopt our customs and culture, but its fairly difficult to avoid the conclusion the come to convert our democracies into Islamic caliphates.

So when we have a multi-cultural force that openly attacks the very basis of the other culture, where can there be any benefit?

Other Muslims have said the posters do not represent them. Maybe they don’t but I have yet to hear any good reason as to why we should subject ourselves to the risk that they might. Vibrancy and diversity just don’t cut it when they’re attempting to take down our democracies.

One thought on “Muslim immigrants in UK spurn democracy”

Aussie workers have had it with woke Labor Party

Urban liberals, living in high density inner city housing, sucking up the “news” from lying mainstream media sources, miseducated at politically corrupted universities and suffering mental health problems at an unprecedented rate are a major voting demographic in most western democracies. They have swung the vote in Victoria for example, and recently in New Zealand, […]

Who is the person making decisions on the future of free speech in New Zealand? List MP Kris Faafoi is really nothing but a two-bit communist hack who has been immersed in left wing party politics most of his adult life. Today he’s considered qualified by Jacinda Ardern to run a number of ministries critical […]

It is sickening to observe the ease with which New Zealand’s so called journalists do propaganda for the state. They’re funded by it of course, so they’re never going to be as confrontational as they should be, but Jack Tame’s QandA discussion on proposed hate speech law changes today was still appalling. One of his […]