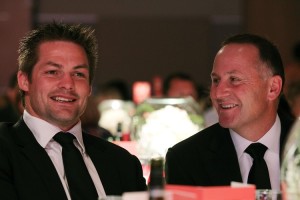 A new tape has just been sent in via the TrueblueNZ tipline of yet another conversation between a well known blogger/ pollster and our Prime Minister. The conversation took place some months ago, just after a June Reid Research Poll recorded a relatively large slump in John Key’s hitherto untouchable popularity.

PM: Morning Dave. Have you seen that Reid Research Poll? I’m down 4.6 percent.

Dave: Yes, something’s not going right, but then, we can’t get it right all the time.

PM: No I expect not, but I ‘m shocked to the core. Why don’t they like me as much? I’m doing all those things we said would work. Dishing out money to deadbeats. Hanging out with Obama and other queers. Meeting the Clintons. Kissing Helen Clark’s arse. Back slapping with Malcolm. Steering clear of Abbot. Hell, I’ve even started singing the National Anthem with gusto.

Dave: Maybe you should go on radio and TV more.

Dave: I think you have to reach out more to millennials. Maybe you should go on a few more low class no talent TV shows. Do idiot radio interviews with degenerate deejays. You know you’re good at that kind of stuff. To hell with the dignity of the office and all that, this is politics.

PM: OK then, we’ll put a bit more effort into those chattering class things. You’re right, they’re a good fit, but what I’d really like to know is why people are turning off me. 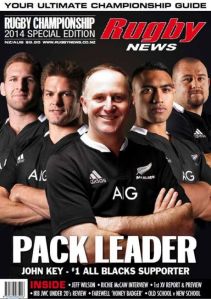 Dave: OK, well, we’ll run a few telephone polls on the issue and see if we can pinpoint it. It could be that your scurrilous arguments for changing the flag are backfiring. Making it seem like you lack integrity, that sort of thing. I know that’s not really the case, but you know those idiots out there who vote.

PM: Hmmm, integrity. What’s that word mean again? Didn’t come across it much in the banking industry.

Dave: It basically means personal honesty. Reliability. You know, whether people can believe in you and what you say.

PM: Can’t be that then or I would have been chucked out long ago. Wouldn’t I? Ha ha. Joking.

Dave: Well, I guess we can thank the MSM for that. All of the things you said you would do, like dump the AGW stuff, do away with the Maori seats, cut spending and taxes, they didn’t want you to do anyway, so they’re happy to let you off that. I think its your campaign of BS on the flag. I could be wrong though.

PM: Well, lets do that polling and see if we come up with a solution. Any recommendations in the meantime?

Dave: I dunno John, integrity is a hard one. Maybe you can get some to rub off on you.

Dave: Well, get your picture in the paper with someone the public respects and sees as a person of integrity. If it happens enough times, some of their image will be automatically attached to you.

PM: Dave, that’s brilliant. Who though? Do we know anyone with that kind of image. I’m struggling.

Dave: Well, there’s no one in politics of course, especially the National Party. Thanks to Steve business is all back slapping cronyism. So it has to be someone outside that frame.  I’ve got it!! Sport.  I suggest Richie McCaw. Polling says he’s well respected by the NZ citizenry.

PM: Brilliant again Dave. A tidal wave of pictures with the All Blacks and Richie McCaw. That’s bound to do it. I’ll get the front office working on it right away. Should be easy with my fan base within the NZRU management.

Dave: OK PM, glad to help. Hope it works for you. Of course if the All Blacks win the World Cup it will be even better.

PM: Damn right. Damn right. Think of what that will do for my image..!! All that refelected glory. The integrity.. Wow, we really have to get this moving and quickly too. Hey, one thing I just thought of though, what if Richie doesn’t like me?

Dave: Don’t worry about it. Just force yourself on him. Richie is too much of a gentleman to accuse you of being a cynical publicity seeking fraud. If he still doesn’t go for it,  just remind him how much taxpayer money we spend on Sport and that you control the budget. That’ll fix it.

Dave: No problem John, and can I just mention that outstanding February account…

Dave: (muttering to self) Damn, he’s stiffed me again. Maybe I need to start sucking up to Judith. 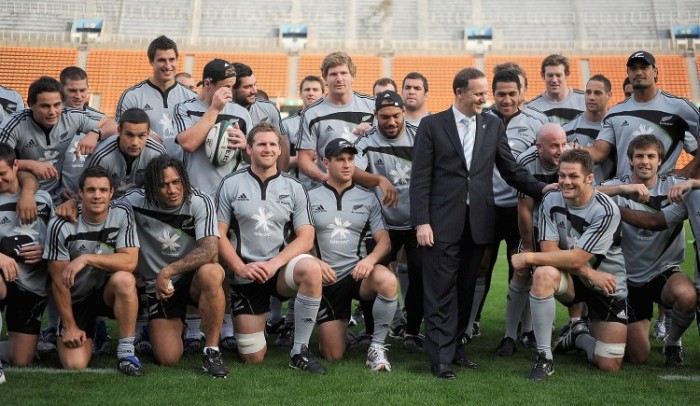