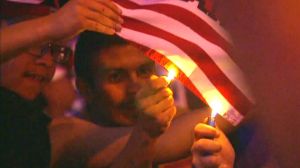 They tried to storm the auditorium and clashed with police — hurling rocks and bottles. Local news reporters witnessed protestors jumping on police cars and smashing windows. The rioters even targeted police horses — knocking one down – and throwing burning T-shirts at others.

The Albuquerque Journal reports “multiple” officers were injured after they were pelted with rocks. We do not have the exact number of injured or the extent of their injuries.

Why is the US tolerating what is effectively an aggressive invasion by a hostile force loyal to another country? (Mexico)? This is completely nuts, and not only nuts but weak and cowardly. These invaders attacking America under the Mexican flag should be rounded up by the army and deported, and denied the means to ever return.

Not at all likely this will happen. US has been so white anted by progressives its apparently not even a real country anymore.

3 thoughts on “US inexplicably does nothing to repel Mexican invaders”

The Labour govt and its media comrades claim tax cuts aimed at reclaiming the $4 billion extra collected (due to inflation and bracket creep) are a bad idea. Because they will increase inflation and because Liz Truss has backed down on a similar idea in the UK. The two arguments are completely fallacious, and here’s […]