Here’s the hard truth about Nancy Pelosi, currently the Minority Leader of the House of Representatives. She is a communist subversive, and her long term ambition is the destruction of the Constitutional Republic. The facts to underpin this assertion are below.

The Democrats have been captured by far left progressive activists and are today an unconstitutional force actively seeking to destroy the US Republic. The Republicans are meant to oppose the Democrats, and sure as hell should be doing something to weed out subversives like Pelosi and stop them, but apparently they’re powerless.

Here are the facts on Pelosi that should have disbarred her from entering the US House of Representatives.

Pelosi holds an executive position in the Progressive Caucus, a subset of The Democratic Socialists of America, which is the US branch of  Socialist International. Who and what are these groups?

The Socialist International carries the torch for Karl Marx, Friedrich Engels, Vladimir Lenin, Leon Trotzky, and Josef Stalin. Pay no attention to the desperate attempts by socialists to distance themselves from Stalin. For our purposes, it is suffice to say that every single tenet of the Socialist International is the exact opposite of the principles upon which America was founded, and which define the U.S. Constitution.

Then we have the Democratic Socialists of America. As the U.S. arm of the Socialist International, they share the symbol of the fist holding the rose, and they share the tasks to be accomplished – in our case, an altogether different America.

This subversive group welds disproportionate power in the Democrats and therefore in US politics by means of The Progressive Caucus, founded in 1991 by Bernie Sanders, who almost won the party nomination.

The political philosophy known as Socialism, a cause the Progressive Caucus vigorously pursues, was devised to combat and prevail over Anglo-American principles, law, and economics. Every version of socialism, from Nazism and Bolshevism to the mildest form of Social Democracy is fundamentally opposed to Anglo-American attitudes and the US Constitutional Republic. 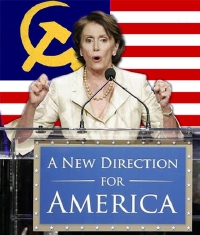 Look at it this way. If an international organization existed to carry the torch for Adolf Hitler and Benito Mussolini, and if Donald Trump or any Republican had past or present ties to such an organization, what are the chances the New York Times would find it irrelevant to the matter at hand?

Its a staggering reflection on the state of politics in the US that such a subversive anti-American group can have been such an important part of the political system for so long, and can wield so much power and influence. Keep in mind that members of the U.S. Congress are required to furnish an oath whereby they will preserve, protect, and defend said Constitution.

The bottom line is the Progressive Caucus is an organised well funded group of communists, and after existing for 35 years, they today own the Democrat Party. Their leader today is Keith Ellison. A Muslim who also chairs the Congressional Lesbian Gay Bisexual Transgender Caucus. Here’s a quote from Ellison-

“The responsible activist has to show young people out there that white supremacy and capitalism are what’s putting them in the position they’re in.“

In an article in the Washington Post 7th February this year, (by communist writer Katrina vanden Heuvel) the Progressive Caucus openly declared its intention to “up its game and bring down the Trump administration”. Quote-

A massive people’s uprising is driving the opposition to President Trump. In Congress, the Congressional Progressive Caucus is an emerging center of that resistance. Last weekend more than 30 of those members joined with activists from across the progressive landscape to share ideas and plot strategy at the annual summit of Progressive Congress.

CPC members individually are already mobilizing against Trump. The challenge is whether the CPC can collectively begin to define the forward-looking agenda of the resistance….. They already know how to support outside movements and groups, and seed political organizing and education in their own districts and elsewhere.

The truth is the DSA is a Communist controlled organisation and so is the Progressive Caucus. Today, those organisations virtually control the Democrat Party, and they are openly stating their intent is to bring down the American government.

The mainstream media will not report these facts, because they’re too a big part of the great deception that today engulfs the US Republic.

Its up to us folks, to get the news out about what the Democrats have become, about who controls them, and what their plans are. Please re-distribute this information by any means you can. We must defeat this group, and their agents like Pelosi, and shining light on them and who they really are will go a long way toward that defeat.