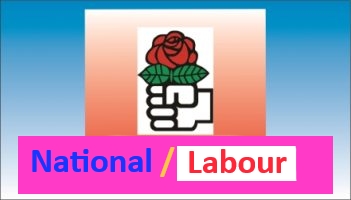 You have to laugh. Can you imagine the conversations going on in the halls of what passes for political power in New Zealand? They all hate each other, and here they are faced with an unknown number of completely unpalatable compromises to try and form a government.

My own view is that its hopeless, and we need a fresh election. Not that that will provide any path out of the MMP swamp, but it could make the process of forming a coalition less laughable.

The Nats are paying the price for their lukewarm support of the 2011 referendum to change the voting system. MMP is the worst possible choice. STV is far superior, and even FPP leaves MMP for dead.

Well, that’s water under the bridge, and there won’t be fresh elections (although there should be) so we now have to look at the best way out of the mess. The solution is in fact glaringly obvious. National has to form a coalition with Labour. Its a move that would satisfy the needs of around 85% of NZ voters.

Bill English is pissed at David Seymour, the effete little social liberal actually dredged up the courage to call the Nats out on their socialist ideas once or twice. The Nats collectively regard Winston Peters as the Devil. The Greens are criminals by association with and enthusiastic support for unapologetic welfare cheat Metiria Turei. How could the Nats join with any of them and retain an iota of credibility?

The closest fit is the Labour party, and given that they really govern the country anyway, whether in power or not, what is the problem? Jacinda and Bill could even be joint Prime Ministers, given both parties are so infatuated with feminism and “equality” for women.

Both National and Labour are pretty much politically aligned and only differ around the fringes. Why not have them both sitting around the table, thrashing out their nominal differences, and moving forward in joint agreement?

Maybe we could even do away with that farce they call Question Time in the house. With Labour and Nats on the same side, they would only be fielding idiot drivel from the Greens and what was left of NZ First. With Winston gone it will be even more of a bore anyway. (He”ll retire if Labour and Nats form a coalition)

The one downside to the agreement would probably be the retention of the Maori seats, but its probable Winston would have given that up anyway.

I like Bill English. I’m glad he did well. The tragedy is MMP, and that’s something the NZ people themselves will have to decide upon. Maybe next time its up for a decision (as it should be) the voters will show a bit more wisdom. Especially after this embarrassing debacle.

17 thoughts on “Its all over bar the impossible compromises”