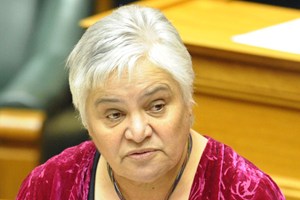 I get heartily sick of the gratuitous pontificating of these crooks and charlatans in parliament, especially of the self important manner in which they speak. A timely example is the patently obvious posturing from the vainglorious power drunk Associate Health Minister Tariana Turia, who launches yet another tax payer funded attack on freedom of choice with her offensive against smoking.

Its a habit I don’t like but for God’s sake why do we need an ignorant statist like this talking down to us in this patronising and insulting manner while she works away at stripping us of our freedoms. Check the crazy rhetoric-

“This is a landmark moment in the history of New Zealand It is about us asserting our own identity as a nation and defining for ourselves the role tobacco is allowed to play in the life of this country – this is not something we are just going to leave in the hands of the tobacco industry. I congratulate the Maori Affairs Select Committee for the work it has done. Today’s response signals a bold step forward as the government continues to accord priority to tobacco reduction and commits to the challenging goal of seeing Aotearoa become a nation that is essentially smokefree by 2025.”

What inflated over important rubbish. Get out of our lives Tariana, and take your pathetic speech making and propaganda offensive with you. What part of “We want to be left alone” do you not understand? And what’s next after smoking? Drinking? Fatty foods? Enforced exercise? Here’s more of the same offensive patronising rubbish-

“It’s about challenging ourselves to take the next step without losing the momentum that we’ve already created. I am absolutely committed to reducing tobacco related harms and the massive health inequalities that smoking brings. There is still so much to be done, but I’m more confident than ever that we can reach the goal of New Zealand being a nation free of tobacco.”

What will do the most for this country is if self serving do-gooders like you just left people alone Tariana, instead of projecting the idea that nothing can be done unless there is some government program to foster it and some tax payer money to enable it. We need a nation of independent citizens, not nanny state ninnies.

And all this rubbish you go on with is really just to make you and other nanny staters feel good about yourselves, and to fool us into thinking we need you. I’m not fooled. Get out of my life and stop stealing the money I work for and spending it on intrusive crap like this. Pontificating fraud. Take it to North Korea.

The full press release is here. The intrusiveness of the plan is intolerable. What are we doing with these kind of people in our parliament?

8 thoughts on “Freedom Under Threat From Posturing Self Important Charlatans”

Climate Change research in elite American universities is being funded by Communist China. If we had a real media in New Zealand, it is certain we would know this was also a major problem here. Communist journalists working for Stuff and Newshub and TV One and the Herald and Radio NZ are all happy to […]

Suhayra Aden should be charged with treason

The West have persistently voted soft weak globalist liberals into power, and the latest example is New Zealand’s Jacinda Ardern, who has just made a major concession to Jihadi terror. Not only has Ardern allowed the traitor Suhaya Aden back into New Zealand, her officials have already said a proposed “investigation” will not result in […]

South Africa- a deception we have yet to learn from

The New Zealand media has published a number of articles to celebrate the 40th anniversary of the cancellation of the Springbok rugby match in Hamilton, and later the end of apartheid in South Africa. In terms of democracy, one man one vote is the standard, and leaving side those born in the country, if you […]