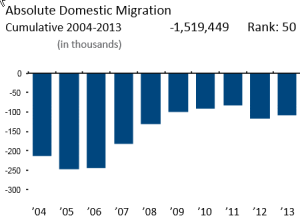 While New Zealand and Australia dither around wondering how to pay off debt, and seem to prefer the option of raising taxes to cutting spending, the American states provide a clear pattern of how tax rates effect interstate migration, and this pattern is bad news for the high taxing states.

According to a new report (PDF) compiled by authored by former Reagan economist Art Laffer and others, Texas and North Dakota, where taxes are low, are the most economically vibrant states in the country. The high-tax states of New York and Michigan rank at the bottom.

The report also found millions of people left highly-taxed states for low-tax states between 2003 and 2013.

North Dakota is placed first in the nation for state GDP growth, with a ten-year increase of 149.4 percent and first for non-farm payrolls, with growth of 35.0 percent. Texas saw GDP increase by 81.7 percent, while non-farm payrolls grew by 20.5 percent.

Michigan on the other hand saw a GDP growth of ony 14.4 percent and a decrease of 6.4 percent in non-farm payrolls.

1.5 million people left New York between 2003 and 2013, the largest exodus of any state. California came in second by that indicator, with 1.4 million leaving. Illinois is placed third, with 647,000 leaving and Michigan placed fourth, with 628,000 moving out.

The US state system forces governments to be competitive or risk declining populations. The message is so clear, its baffling why the Australian govt and to a lesser extent the NZ govt still cling to Keynesian economic theories that the US states prove are well past their use by date.

Prosperity comes from low govt spending and low taxes, and that prosperity generates windfalls to govts that are a far better outcome than the naturally dampening effect of high taxes. Not least in growing populations and impressive increases in GDP.

3 thoughts on “Competition among US states drives population shifts”