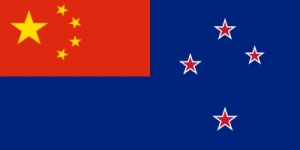 I’ve campaigned strongly on the flag issue, on this blog and on Twitter. Not only do I not want it changed, but I’m very annoyed at John Key’s plan to spend $28 million on promoting the idea.

Especially when the oleaginous bureaucrats who wrote the charter for this exercise in Key self promotion specified that “no presumption of change should be made”. The first referendum to choose the flag pattern to change to of course violates that charter.

Let’s face it, nobody wants this flag change other than a minority of diehards and John Key who sees it as his political legacy. If Key was straight up about it, he wouldn’t use the office of Prime Minister to his own ends this way.

The right thing for him to do is to wait until he leaves parliament, and then lobby for the change as a private person or group, using his own money not $28 million of taxpayer money, and raise enough signatures for a referendum on the flag by his own damn efforts.

The whole process as presently planned with the cronyist panel and two referenda is a cheap dishonest farce designed to soften up a reluctant public and increase the vote for change, and it will probably still fail anyway, and we’ll be left with the same flag with $28 million of taxpayers money down the drain. The NZ Herald reports–

Winston Peters said his party was backing a “fight for the flag” campaign by the Returned Services Association (RSA).

“New Zealand First backs the RSA’s call for the first referendum to simply ask, ‘Do you want to change the flag?’ If the majority say ‘no’ then that should be it,” Mr Peters said.

“We challenge all other Members of Parliament to publicly declare if they will back the RSA’s call.

Well said Winston. And I hope you get individual Nats to support you, but I think you will be lucky. They all appear to me to be dead scared to break ranks on the issue, apparently fearing the wrath of the John Key/ Steven Joyce power group.

We now have NZ First, the RSA and the Labour party objecting to the two referenda plan. Where National’s flunkies ACT stand I don’t know. Key always sold the scheme on the basis it had cross party support but that doesn’t seem to be the case now. And with Winston holding a lot more power after winning Northland, the arrogant Key may have to rethink his grand scheme.

Flag debate- No presumption of change a principle being clearly violated

NZ Flag change panel, find me a no vote