Who could not be affected by the picture of the body of an innocent and defenceless boy lying on the beaches of Europe? However, whether or not anyone is affected by that tragic scene is not the issue. Its how you process the information that is important.

Progressives saw the picture and immediately went into emotional mode. As they do in most things, and this is what I mean when I say they are a threat to Western civilization. They are apparently unable to react with rational thought and in today’s dangerous global political climate this could be fatal.

Once Progressives had seen that picture, they were mostly ready to give unprecedented access to the West by hordes of barbarians most of whom are not refugees but subversives who want to conquer Europe for Allah.

Scott attempts to imply the boy was a victim of terrorism, when in fact he and his family had been living peacefully in Turkey for some years before getting on a boat and joining the invasion of Europe. Scott’s interpretation is a lie that to coin an old phrase, has galloped all around the world before the truth has put its foot in the stirrup. Among liberals anyway.

Notice in the photo below of immigrants arriving at Munich rail center. No women. No aged. No infirm. They’re all healthy well clothed males, and they’re mostly of fighting age. Notice their appearance. Do they look like refugees should look? Tired? Harried? Hungry? Thirsty? Desperate? Not to me. What Progressives have to tell us is how many of these “refugees” are terrorists or Islamacist idealogues intent on subjugating Europe to Islam and Sharia law? 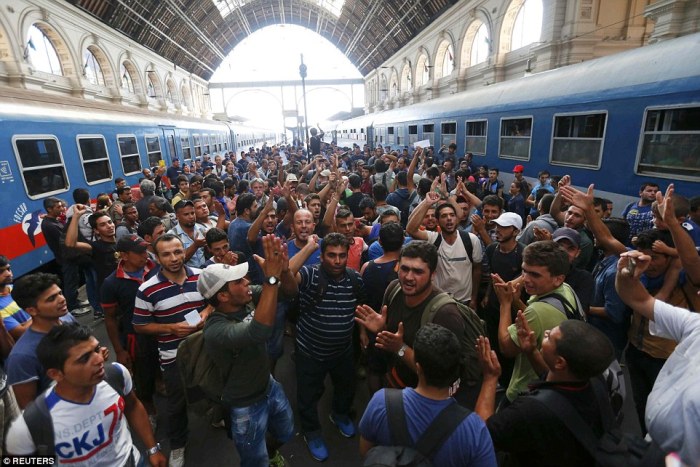 Progressives can’t answer that of course, but they’re prepared to take the risk. They saw a picture of a drowned three year old on a beach and this makes it all mandatory.

Anjem Choudrey, recently jailed and now out on bail for publicly supporting the savage barbarians of ISIS, said this –

“It may be by pure conversion that Britain will become an Islamic state. We may never need to conquer it from the outside.  Many Muslims are having 10 or 12 children per family. The swollen Muslim population will be enough to conquer Britain from inside. We do not integrate into Christianity. We will ensure that one day you will integrate into the Sharia Islamic law. We will conquer you through the wombs of our women”.

He will do that too, if the West continues to allow irrational and emotional Progressives to control our political condition.

Here’s another picture of a body on a beach for them to get emotional over. He was an American soldier who died at Normandy bringing Europe the freedom Progressives are now ready to so casually cast to the wind.