Nevada rancher Cliven Bundy’s three sons and ‘about 150’ militiamen have occupied the Malheur National Wildlife Refuge HQ to protest the pending re-imprisonment of two Oregon ranchers convicted of arson, arguing the federal government has no authority in local cases.

The occupation of the Wildlife Refuge came shortly after an estimated 300 marchers, militia and local citizens both paraded through Burns (Oregon, pop 2700) to protest the prosecution of the two local ranchers.

Dwight Hammond (73) and Steven Hammond (46), have already served their original sentence, but are being re-jailed after an increase in the sentence demanded by the federal prosecutor. The re-sentencing occurred after a successful appeal initiated by a husband and wife team working at the BLM. (see more detail below) The Hammonds are to report to prison on Monday and now face a further 4 to 5 years on top of their original sentences.

The Hammonds are also unhappy that a law intended to be used against terrorism was used to prosecute them. Born in the US, they have never used force or arms against anyone, are not part of any subversive group, and have lived peacefully in the area since they bought their ranch in 1964. The purchase included approximately 6000 acres of private property, 4 grazing rights on public land, a small ranch house and 3 water rights. The ranch is around 53 miles South of Burns.

In August 1994 the Bureau of Land Management & Fish and Wildlife Service illegally began building a fence around the Hammonds water source. Owning the water rights and knowing that their cattle relied on that water source daily the Hammonds tried to stop the building of the fence. The BLM & FWS called the Harney County Sheriff department and had Dwight Hammond (Father) arrested and charged with “disturbing and interfering with” federal officials or federal contractors (two counts, each a felony). 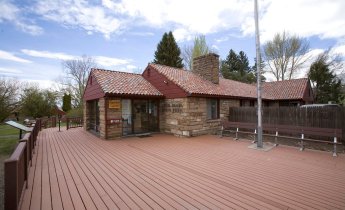 He spent one night in the Deschutes County Jail in Bend, and a second night behind bars in Portland before he was hauled before a federal magistrate and released without bail. A hearing on the charges was postponed and the federal judge never set another date.

The FWS also began restricting access to upper pieces of the Hammond’s private property. In order to get to the upper part of the Hammond’s ranch they had to go on a road that went through the Malhuer Wildlife Refuge. The FWS began barricading the road and threatening the Hammonds if they drove through it. The Hammonds removed the barricades and gates and continued to use their right of access. The road was proven later to be owned by the County of Harney.

Shortly after the road & water disputes, the BLM & FWS arbitrarily revoked the Hammond’s upper grazing permit without any given cause, court proceeding or court ruling.

The Hammonds were forced to either build and maintain miles of fences or be restricted from the use of their private property. Cutting their ranch in almost half, they could not afford to fence the land, so the cattle were removed.

In the early fall of 2001, Steven Hammond (Son) called the fire department, informing them that he was going to be performing a routine prescribed burn on their ranch. Later that day he started a prescribed fire on their private property. The fire went onto public land and burned 127 acres of grass. The Hammonds put the fire out themselves. There was no communication about the burn from the federal government to the Hammonds at that time. Prescribed fires are a common method that Native Americans and ranchers have used in the area to increase the health & productivity of the land for many centuries.

In 2006 a massive lightning storm started multiple fires that joined together inflaming the countryside. To prevent the fire from destroying their winter range and possibly their home, Steven Hammond (Son) started a backfire on their private property. The backfire was successful in putting out the lightning fires that had covered thousands of acres within a short period of time. The backfire saved much of the range and vegetation needed to feed the cattle through the winter. Steven’s mother, Susan Hammond said: “The backfire worked perfectly, it put out the fire, saved the range and possibly our home”.

The next day federal agents went to the Harney County Sheriff’s office and filled a police report making accusation against Dwight and Steven Hammond for starting the backfire. A few days after the backfire a Range-Con from the Burns District BLM office asked Steven if he would meet him in town (Frenchglen) for coffee. Steven accepted.

When leaving he was arrested by the Harney County Sheriff Dave Glerup and BLM Ranger Orr. Sheriff Glerup then ordered him to go to the ranch and bring back his father. Both Dwight and Steven were booked on multiple Oregon State charges. The Harney County District Attorney reviewed the accusation, evidence and charges, and determined that the accusations against Dwight & Steven Hammond did not warrant prosecution and dropped all the charges.

In 2011, 5 years after the police report was taken, the U.S. Attorney Office accused Dwight and Steven Hammond of completely different charges, they accused them of being “Terrorist” under the Federal Antiterrorism Effective Death Penalty Act of 1996. This act carries a minimum sentence of five years in prison and a maximum sentence of death.

June 22, 2012, Dwight and Steven were found guilty of starting both the 2001 and the 2006 fires by jury. However, the federal courts convicted them both as “Terrorist” under the 1996 Antiterrorism Act. Judge Hogan sentenced Dwight (Father) to 3 months in prison and Steven (son) to 12 months in federal prison. They were also stipulated to pay $400,000 to the BLM. Hogan overruling the minimum terrorist sentence, commenting that if the full five years were required it would be a violation of the 8th amendment (cruel and unusual punishment). The day of the sentencing Judge Hogan retired as a federal judge.

On January 4,, 2013, Dwight and Steven reported to prison. They fulfilled their sentences, (Dwight 3 months, Steven 12 months). Dwight was released in March 2013 and Steven, January 2014.

Sometime in June 2014, Rhonda Karges, Field Manager for the BLM, and her husband Chad Karges, Refuge Manager for the Malheur Wildlife Refuge (which surrounds the Hammond ranch), along with attorney Frank Papagni filed an appeal with the 9th District Federal Court seeking Dwight’s and Steven’s return to federal prison for the entire 5 years.

In October 2015, the 9th District Court “resentenced” Dwight and Steven, requiring them to return to prison for several more years.

There are reports that the Hammonds themselves are prepared to return to prison and are not part of the occupation of the federal building.  They issued  a public statement by their lawyer, in a letter to the Sheriff dated December 11, 2015, saying:

Neither Ammon Bundy nor anyone in his group/organization speaks for the Hammond Family, Dwight Hammond or Steven Hammond.  In addition, I wish to report to you that, as recently ordered by the District Court, District of Oregon, Dwight Hammond and Steven Hammond intend to voluntarily report to the designated federal facility on January 4, 2016, as required.

In phone interviews from inside the occupied building Saturday night, Ammon Bundy and his brother, Ryan Bundy, said they are not looking to hurt anyone. But they would not rule out violence if police tried to remove them, they said. “The facility has been the tool to do all the tyranny that has been placed upon the Hammonds,” Ammon Bundy said.

Neither man would say how many people are in the building or whether they are armed. Ryan Bundy said there were no hostages, but the group is demanding that the Hammonds be released and the federal government relinquish control of the Malheur National Forest.

He said many would be willing to fight and die if necessary to defend what they see as constitutionally protected rights for states, counties and individuals to manage local lands.  Ammon Bundy posted a video on his Facebook page calling on patriots from across the country to report to the refuge with their weapons. Below the video is this statement: “ALL PATRIOTS ITS TIME TO STAND UP NOT STAND DOWN!!! WE NEED YOUR HELP!!! COME PREPARED.”

Among those joining Bundy in the occupation are Ryan Payne,  U.S. Army veteran, and Blaine Cooper. Payne has claimed to have helped organize militia snipers to target federal agents in a standoff last year in Nevada.

The Sipsy Street Irregulars are not impressed by the actions of the Bundy group. See “Perfect timing for the regime. Federal provocateurs, sociopaths and idiots with a John Brown complex are writing checks that they expect the rest of us to cash in our blood.”

Meanwhile the Oathkeepers have issued the following statement

“We cannot force ourselves or our protection on people who do not want it.   Dwight and Steven Hammond have made it clear, through their attorney, that they just want to turn themselves in and serve out their sentence. And that clear statement of their intent should be the end of the discussion on this.  No patriot group or individual has the right or the authority to force an armed stand off on this family, or around them, against their wishes.  You cannot help someone who does not want your help, and who are not willing and ready to take a hard stand themselves.”

Video- Ammond Bundy makes a call for patriots to join them in Burns Oregon.

14 thoughts on “Oregon militia in stand off with BLM”