A few blogs are rejoicing over employment figures they see as a further sign that National are the better managers of the economy. Well, I guess I would have to concur with that general point, as I would agree that Castro is a more acceptable Communist than Stalin, because he murdered far less of his citizens.

I had a look at the figures, and I have to wonder what the real situation is here. I’m not going to argue with the strangeness of some of the results, such as agriculture being up when milk prices are so low and look like going even lower. Maybe this can be explained somehow.

As far as construction goes, well naturally that’s going to be up due to the great need for housing driven by immigration. See graphs.

Given this driver, I’m not at all convinced this signals that National are good managers of the economy. As I said above, better yes, but good? I don’t think so.

Then there are that stats themselves. If unemployment is down, why is the Labour Force Participation rate down? If NZ is going so well, why is the average of paid hours worked so low as 24 hours/ week? See graph below for a global comparison.

Here is what the Stats Dept has to say on the LPF rate.

The drop in labour force participation (coupled with a rise in employment) has contributed to the fall in unemployment over the December 2015 quarter.

In fact the LPF rate has been falling for three consecutive quarters. According to the stats here, this quarter there are 14000 less NZers of “working age” in the Labour market than last quarter. 61000 over the full year.

You see how they do it? Just take 61000 people out of the so called Labour Force Participation category and boom, you’ve got your drop in the unemployment rate. 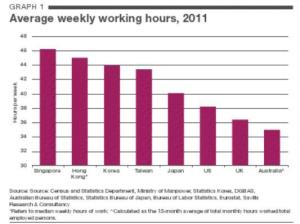 by the Nat Party public relations office. It puts one in mind of Cuba, where the much vaunted successes in health care and education collapsed once put under real scrutiny. No one was surprised to hear that Cubans who liked Castro were compiling the misleading figures.

Not alleging any such deceit by the NZ Stats dept, but it seems to me one has to stretch things a bit to say that the fall in unemployment is real, and an indication that National are guiding the economy well.

One day, I hope we might all awaken to the benefit of keeping govts away from the economy. Then its condition will no longer depend upon which band of  over-taxing over-spending dull witted cronyist socialist arseholes are in govt at any given time.

4 thoughts on “What’s really going on with unemployment?”

Where are the challenges to the left’s constant lies?

Yesterday Candace Owens said she fell like she was living in a fiction, and its true. The USA, and most of our Western societies are drowning in a sea of lies. These lies in the main emanate from left wing politicians (Democrats in the US) and their comrades who have taken over the media. They’re […]

Yet another assault on privacy from the generation that has sold its soul to big tech. The billions of dollars in taxes the govt gets from private vehicle use (taxes make up about half of the pump price) are under threat as they force people to use electric vehicles or public transport instead of conventional […]

Candace Owens nails it on Tucker Carlson Tonight with a devastatingly accurate attack on the Democrats and their propaganda media comrades. “There are two pandemics going on in this country. There is a pandemic of ignorance, and that is only allowed to fly because we also have a pandemic of cowardice. We do not have […]