Trump has been asking for it. 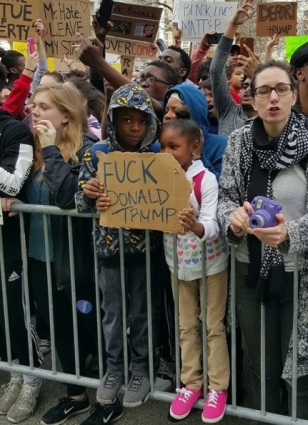 That’s not what I think. I’m merely attempting to paraphrase most of the commentary I have read on the violence that is occurring in the US election campaign.

However, whether you’re for him or against him, the argument is really much bigger than Trump.

As my good friend Gantt Guy has pointed out, Trump has made statements in the past that are actually reminiscent of what the left are saying about him today. For example Trump condemned Pam Gellar for her stand against Islamist threats. Saying she was inciting violence. So its not possible to logically defend someone whose statements are often so politically inconsistent. That’s why I am not trying to defend Donald Trump.

The substantive issue is this- Trump has boldly snatched the political narrative from the left wing establishment political class. The US election is like something that we have not seen in the West ever. It threatens by its success in the United States, to destroy the left’s political and cultural hegemony right across the globe. That is the real reason the left want to stop Trump.

Trump’s support is a spontaneous uprising against the soft tyranny of the left and they know it. To them, its not so much defeating Trump that is important. They must put down the popular uprising to show the extent of their power, and to stop the revolt from spreading.

Trump is a flawed political figure, but he is the catalyst for the revolution. Many are prepared to overlook his flaws for they see him as the best chance to rid themselves of the soft left wing tyranny they have suffered for so long.

And I always knew that when the innate violence and savagery of the left was finally forced to the surface, it would happen in the US. For the US is different to Australia, Canada, New Zealand and the UK. Its founders gave it the gift of a Constitutional Republic. That’s why its citizens are still heavily armed, and you cannot face the speech crimes there that Mark Steyn faces in Canada for example.

The US Constitution and the Bill of Rights, mainly in  the 1st and 2nd Amendments, severely limits the options for the left. That is why we see Trump arising there and not in any other Western country.

Not to say the left have not tried. Cultural Marxism aka communist subversion has achieved remarkable success in the US for the left. However their efforts have failed by a long shot to achieve the same successes as they have in NZ, or Australia or the UK or Canada.

If Trump prevails, its only going to get worse in the US. Let’s not forget that the violence so far is one way, in that it is only eventuating when left wing protesters attend Trump rallies. So far, there’s been no violence caused by Trump supporters at Sanders or Clinton rallies.

Trump threatened on Twitter today to send his supporters to Bernie’s events. Good on him. Why? The only way we will defeat the left is by facing up to their innate predilection for violence. Any other reaction will just encourage them.

Its not about Trump. Its about the left and what they will do to maintain control of the political narrative in the West.

Its crunch time in the US. Its crunch time for Western civilization. The bloodshed we always knew was coming from the left is only inches from the surface. Failure to confront these vulgar ignorant and savage barbarians will signal the end of the free world. They simply must be stopped, and by whatever means is necessary.

Video. CNN “journalist” Jake Tapper covers for Obama’s call to his supporters to upscale the violence.

23 thoughts on “Trump- Left’s innate thuggery about to surface”