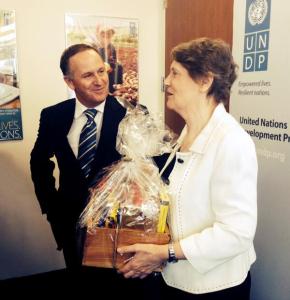 Read any left wing blog and or their mainstream media counterparts and you can’t fail to see they’re seriously worried at the continued failure of their attempts to lower John Key’s approval rating.

No matter what feeble scandal they dredge up or what more legitimate criticism they come up with its all water off a ducks back with the voters.

And the left are perplexed as to why this is happening. When the answer is staring them in the face, except they’re barred from seeing it because there is a breakdown in the power circuit between their eyes and their brain.

1) They haven’t managed to work out Key’s deflection strategy yet and,

2) The public largely agree with what Key is doing and they understand why he is doing it.

I’ll expand on item 2) first, as its less complex. John Key is a committed socialist/ progressive who is happy with NZ’s status quo. He’s admitted this himself on a number of occasions. He’s happy to roll along with the welfare state he inherited from Helen Clark, and he’s not driven by any wish to change it, only to manage it better than she did.

NZers on the whole, meaning from the biggest most useless bludger out there, to the most hard working small business man, and the big corporate cronyists, are all relatively happy with this state of affairs too.

That’s because they’re all getting their slice of the pie. The bludger gets the dole or other various handouts, the small businessman gets the grants, or allowances or whatever other euphemisms the govt uses for the dole to businesses, and the big corps get the regulated environment they need, designed to stifle growth of small businesses and thereby excuse the big corporations from the need to operate competitively.

All three share the same sentiment. They don’t want the boat rocked. No matter that their comfort is sustained by massive govt debt ($70 billion) and a budget deficit every year. No problem that $4 billion is spent each year paying the interest on that debt. They’re all doing OK. Not great, but who wants change and risk and all that? Lets just rock on with the Helen Clark / John Key plan.

The voters know that when John Key does something, like sell our heritage, our businesses, our land and our culture to Communist China, its OK because he’s having to do this to keep the socialist ship on the socialist cruise afloat.

That is the main point. The voters know that most of what John Key does on the economic front is predicated on sustaining the socialist model. Forget about down the track. Forget about Argentina. Venezuela. Greece. That’s all not really down to socialism, it was down to bad management of socialism. John won’t make those same mistakes.

So that’s why the left can’t touch him. He’s the sensible and heroic captain keeping the socialist ship afloat and on course. EOS.

Now to point 1), the deflection strategy. This comes from Key’s public relations advisory gurus and is basically a system to neuter any left wing attacks. (they only come from the left wing). First of all the attack is confronted. Either directly as a lie or misinformation, or with a smokescreen.

Things are then left for a while to percolate while the advisory gang watch and decide the next move. If the denials and smokescreens isn’t enough they go to phase two, which is a half baked concession that maybe there is something to be fixed and we’re looking at what we can do to fix it. This may even include a soft apology or an admission of guilt, whatever is needed to calm the situation further.

Phase three comes into play only if the two previous phases have failed, and is built around an admission that something is wrong and the govt needs to review legislation, pass new laws, whatever, to fix it.

So the attack is completely neutralised and peters out into lame whimpering from Labour or whoever. Want an example look at Auckland housing. First there’s nothing wrong. Then, well maybe there is something wrong, we’ll try and fix it. Today, as I write this, the talk is of land tax or something similar. See how it is done?

The whole scenario is driven by one concern, and that is to keep the Labour Party out of power and to stop them scoring even the slightest hit on National. Look at the record. Almost every attack has been successfully defused by this strategy.

The deflection strategy could also be called surrender. (at least in phase 3) But who the damn hell cares about that in the National Party anymore? In reality just the Labour Party of 2007. Leader most of all.