Not everyone has worked on a fishing boat and knows how fish are netted. One of the main techniques is with a trawl net. Its wide at the top, and induces fish to swim i 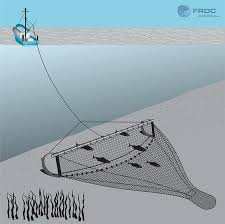 nside, whereafter it gradually narrows and eventually the fish find themselves trapped, unable even to turn around or reverse, in the narrow end of the net. They’re then hauled out flapping futilely and dumped in the hold. The capture is complete.

The left have for decades now been intent on controlling thought and speech, and in pursuing this objective, they’ve used a strategy not unlike the trawl net. At first, they only complained lightly of words and thoughts at the outer edge of the spectrum, demanding mild changes that would not be too disturbing to mainstream society. Then as time went by, the left became bolder and more forthright, and society, perhaps a little perturbed but still not sure there was a real threat, kept swimming into the net.

Today, we are in the narrow bag at the end of the net, and more or less incapacitated and ready to be lifted, swung and dumped flapping futilely into the freezer hold.

Its clear now we should have been alert to the net right at the beginning, when it was wide, and there was still space to swim around and circle our way out. And then mark that down to experience and never ever ever even think about swimming into such a net again.

We should have rebuffed the left right at the beginning. Now we’re in a place where if a man tells a harmless joke at a private function, his political enemies can basically draw and quarter him.

One does not have to know Larry Pickering to understand that he’s not any kind of “hater”. In fact, its doubtful you’d lose your money in betting he would physically defend any homosexual (or even perhaps a leftist) if they were under attack by thugs or other miscreants. A guess is he is like many who do not buy into the proposition that homosexuality should be celebrated, but does not wish homosexuals any harm, and wants them to have as much success in life as any heterosexual.

The left’s problem with Larry is that he saw the net right from the outset. Its worth a thought how the campaign to have homosexuality accepted as normal followed the same kind of trawl net strategy as left wing politics. First the word “homosexual” was replaced by the fine word “gay”, a change that seemed quite innocuous.

Today, a person can lose their job and destroy their career if by some word or deed they illustrate that they do not buy into the approved cultural stance of not just tolerance, but celebration. Anyone objecting to lewd displays promoting homosexuality at cultural events like parades, concerts or sporting events better watch it, or they’ll be in the bus on the way to the re-education camp 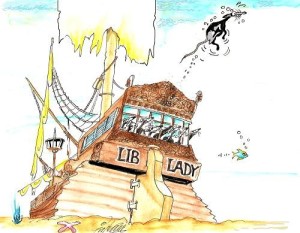 before they can say Harvey Milk. Its wrong, and I object to it, and I stand against it.

Larry made a joke. It might have been in poor taste, but hell, jokes in poor taste are how many left wing comedians sustain their career, and its frequently Conservatives who are the butt of those jokes. It might not even have been a good joke, but how would we know the good ones without bad ones to compare them to?

At the centre of Larry’s joke is the strange alliance of the Left and Islam. Leftists will censure you for joking about homosexuals, but their Islamic allies advocate that homosexuals should be thrown off buildings. (its in the Koran). The humour is in the fact that both factions apply serious censure if anyone dares to breech their dictated conventions, yet those conventions grossly contradict each other. They both oppose Larry because his joke highlights their hypocrisy and the absurdity of their political alliance.

The overarching point is that we have to defend Larry because he’s telling us about the wide gaping trap we swam into. If we can’t defend him, we relics who still value freedom of expression should not condemn him, but leave that to the left. They’ll do that job well enough without our help. Dee Madison and Janine Perret are two examples who have demonstrated that point well enough.

Pickering has in the past had to have a Police guard because of threats of violence from Islam and the left. Right now the left are brazenly assaulting us in the streets. Right now, homosexuals are putting Christian bakeries out of business if they won’t bake a themed wedding cake. Right now, Islamists are committing terrorist attacks all over the West. Right now, the leader of the Liberty Alliance is in danger of bankruptcy because she spoke out on halal certification. Yet we can’t wait to pile on when Larry Pickering makes an off colour joke at a private gathering????

And how about we stop using terms like “homophobic”, a made up word, and an especially cowardly smear that implies insanity. A device to shame outsiders into compliance.

The ultimate objective of the left’s onslaught on freedom of expression is a state where to voice Conservative ideas becomes illegal, or at least improper. They’ve actually made a lot of ground towards that outcome. It should never have happened. We should have torn their net to shreds when it first appeared.

Now we have to break out before we find ourselves stiff and cold in the freezer. We simply have to offend them. We simply have to outrage them. Anything else they see as encouragement or worse submission. That’s why we should say more power to Larry Pickering, and encourage him to keep doing what he has been doing for so long.

He’s a hero. He’s also dying of cancer poor bastard, and doesn’t have much longer. When he goes, we’ll all be so much the worse off. Best wishes Larry, and keep up the good work. As long as you are able and willing.

4 thoughts on “I’m with Larry, and you should be too”