As truth is always the first casualty of war, so is education the first casualty of socialism. NZ kids started to fail at maths 40 years ago, and now these kids have joined National or Labour, NZ’s two main socialist political parties, and in the worst of two not very pleasant outcomes for the country, the ones in Labour are today governing NZ.

Socialists capture education because a prime requirement of the expansion of that political ideal is ignorance and fantasy. Those requirements cannot prosper among a truly educated populace, so education systems are always targeted as the most necessary beach head for eventual socialist political hegemony.

1912 exam shows why maths had to be dumbed down. Kids who could do these calculations in grade 8 would never fall for the false maths of socialism as adults.

The NZ Labour govt’s flagship policy was housing, and they promised to build 100,000 houses in ten years. A policy that could never have had any founding in reason, or worse economic reality. Nevertheless, it was endorsed enthusiastically by every Labour politician. This endorsement is all you need to know to understand the fact that socialists cannot do maths.

It is actually possible to build 100,000 homes in 10 years if you do it right and the needs and resources are available. However the resources and needs were never going to be available in New Zealand, and of course, govt can never do anything right ever. So it was obviously impossible right from the get go. To anyone with some slight idea of practicality, or more important, an average ability to do maths, that is.

NZers had to witness the hapless Housing Minister Phil Twyford staggering and stumbling and blundering trying to turn a socialist fantasy into reality, and eventually being fired for being unable to accomplish the impossible.

Here’s how you build 100,000 houses in ten years, even if you’re not a maths genius. You open Microsoft Project, or any like software, and enter the figures and the schedule develops itself.

How long does it take to build one house? Let’s say three months. What labour resources do you need? A guess would be three carpenters, a plumber, and electrician, a roofer, a plasterer, a tiler, a carpet layer, etc. So you put the required number of these trades into your project. Then you have to enter your material resources, with lead times for supply. Timber, steel, plaster, roofing, concrete, etc.

Microsoft Project was built with maths challenged socialists in mind, and it will automatically calculate an outcome for all these factors. Then you extend this schedule to build 10,000 houses in a year, and voila, there are your labour/ material requirements.

With even the skinniest and time saving of schedules, no doubt far beyond ever being met by the NZ construction industry.

Of course, someone might have actually done this, for at some stage, the target was reduced, and today, there is no target, and possibly not even a plan to build any houses at all.

In socialist fantasy land, NZ had appeared to be a barren desert of land available for building, with no regulations around construction, an unquenchable supply of purchasers, a hundred thousand tradies just hanging around with nothing to do, and a massive stockpile of building materials.

How out of touch with reality do you have to be to buy into such a vision?? Yet they did. All of Labour, and of course our great leader, Jacinda Ardern, and this posse of dummies was backed up by the left wing ghouls who have captured the media. (just as they have captured education).

Some simple maths would have prevented this embarrassing failure but the uneducated socialists infesting the government of this country were incapable. 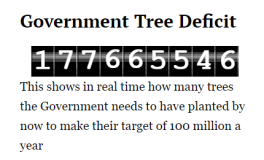 Of course, this lack of mathematical ability was brought into stark relief by the collapse of Kiwibuild, but it infests every other area of government policy as well. The most clear example is the carbon reduction targets. Or its utterly absurd tree planting ambitions. (with thanks to David Farrar for the graphics) Again, simple maths would show them as foolish & impossible, but Labour & its media agents all buy enthusiastically into them.

Its incredible that a large sector of NZ voters trusts these incompetent poseurs as capable of running the country to a budget. Debt is always the left’s best friend, and we’re already, before the first term is up, going down that well worn road.

Want another glaring example of the left’s inability to do simple maths. Venezuela. Once the richest country in South America, it has been reduced to poverty and starvation by a long run of socialist government.

How much license will NZ voters give our current crop of mathematically challenged socialists to wreck this country? Let’s hope not the same amount given to the Venezuelan socialists by the poorly educated and misinformed voters of that country.